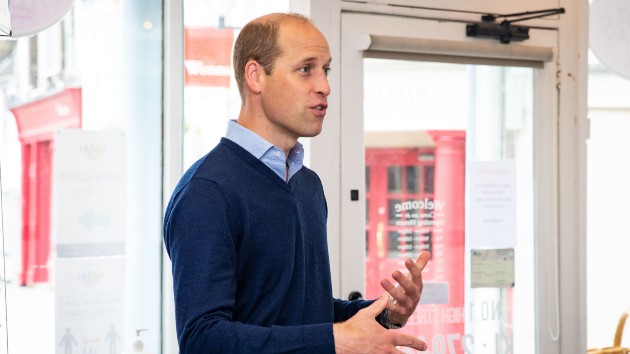 Aaron Chown/WPA Pool/Getty ImagesBy ANGELINE JANE BERNABE, ABC News (LONDON) — As many dads across the world celebrated Father’s Day over the weekend, so did the Duke of Cambridge, whose birthday, coincidentally, fell on the same day this year.In a newly released photograph that was shared on Saturday, ahead of Prince William’s 38th birthday, and Father’s Day, the prince is seen sitting on a swing with his three kids: Prince George, Princess Charlotte and Prince Louis.

The Duke and Duchess of Cambridge are very pleased to share a new picture of The Duke with Prince George, Princess Charlotte and Prince Louis ahead of The Duke’s birthday tomorrow.The picture was taken earlier this month by The Duchess. pic.twitter.com/maFAGS4bTe

The photo was taken earlier this month by his wife, Kate, the Duchess of Cambridge.Two more photos of Prince William, with his kids piled on top of him, were shared by Kensington Royal Sunday on Instagram and Twitter. In the caption, the family thanked their followers for all the birthday wishes.

Thank you everyone for your very kind wishes on The Duke of Cambridge's birthday today! 🎂 🎈 pic.twitter.com/9vHLhSvzIr

To celebrate Father’s Day, Kensington Royal also shared a photo of Prince William and his father, Prince Charles, at Sandringham in December of last year. The photo was taken by the Duchess of Cambridge.The family also shared a much older picture of Kate and her father, Michael Middleton, from when she was younger.

Happy Father’s Day!On the left, The Duke of Cambridge with Prince of Wales at Sandringham in December 2019, and on the right, Michael Middleton with his daughter CatherinePhoto on the left taken by The Duchess of Cambridge pic.twitter.com/VN461CZzmi