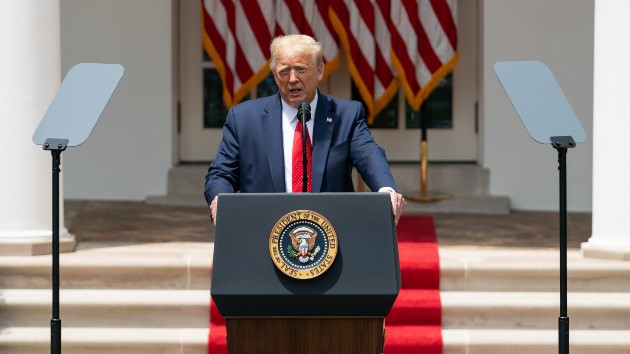 Official White House Photo by Shealah CraigheadBy ELLA TORRES, ABC News(WASHINGTON) — President Donald Trump on Tuesday said he “authorized” the federal government to “arrest anyone who vandalizes or destroys any monument, statue or other such Federal property in the U.S.”Trump also said the offense would be punishable with up to 10 years in prison.

I have authorized the Federal Government to arrest anyone who vandalizes or destroys any monument, statue or other such Federal property in the U.S. with up to 10 years in prison, per the Veteran’s Memorial Preservation Act, or such other laws that may be pertinent…..

“This action is taken effective immediately, but may also be used retroactively for destruction or vandalism already caused. There will be no exceptions!” he wrote on Twitter Tuesday morning.His comments come as protesters against police brutality and systemic racism have called for statues and other monuments of historical figures with ties to racism or slavery to be taken down.In the most recent instance, protesters tried to pull down a monument of Andrew Jackson, the seventh president of the United States, in a park near the White House on Monday evening.Police eventually intervened, but protesters still had managed to climb atop the statue and tie ropes around Jackson and his horse in an attempt to bring it down from its base, which was spray-painted with the word “killer.”Trump cited the Veterans Memorial Preservation or “such other laws that may be pertinent” to enforce the arrests.One section of the act states that a person who willfully injures or destroys veteran memorials — or attempts to do so — shall be fined and/or imprisoned no more than 10 years.  Copyright © 2020, ABC Audio. All rights reserved.