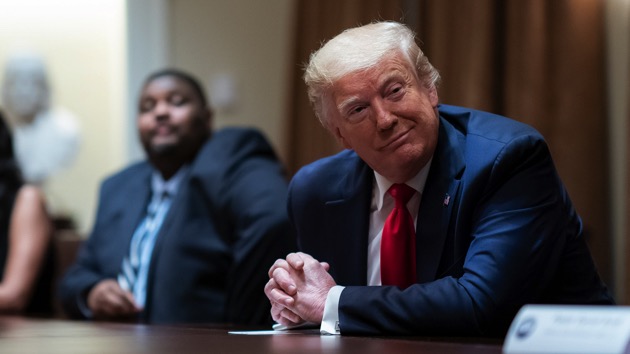 Official White House Photo by Tia DufourBy BEN GITTLESON, ABC News(WASHINGTON) — President Donald Trump flatly contradicted his aides on Tuesday when he said he does not “kid,” after they had for days been arguing he was joking when he said at a weekend campaign rally he had told officials to slow down coronavirus testing.It was yet another instance of the White House scrambling to come up with language to play down one of his comments that had triggered a firestorm, only to have Trump himself, in the end, providing a completely different explanation.This time, top deputies had repeatedly argued Trump was kidding when he told supporters in Tulsa, Oklahoma, on Saturday: “When you do testing to that extent, you’re going to find more people, you’re going to find more cases. So I said to my people, ‘Slow the testing down, please."”But on Tuesday, Trump said he does not joke.”I don’t kid,” Trump told reporters outside the White House Tuesday, en route to speak to young supporters at a megachurch and visit the U.S.-Mexico border in Arizona, a coronavirus hotspot. “Let me just tell you — let me make it clear: We have got the greatest testing program anywhere in the world.”The morning after Trump’s speech in Tulsa, White House trade adviser Peter Navarro had said in an interview with CNN that Trump’s comment was “tongue in cheek.””That was a light moment for him at a rally,” Navarro said.Then, on Monday morning, Treasury Secretary Steven Mnuchin — who has been intimately involved in the Trump administration’s response to the coronavirus pandemic — told ABC News he had not heard any conversations about slowing down testing and that Trump must have been joking.Later that morning, in an interview with Scripps National News, a reporter asked Trump himself — twice — if he had actually asked his staff to slow down testing.Given the opportunity to expand on his widely criticized comment, the president said nothing about whether he had been kidding.”Uh,” Trump said, pausing. “If it did slow down, frankly, I think we’re way ahead of ourselves, if you want to know the truth. We’ve done too good a job.”Soon after, ABC News asked White House press secretary Kayleigh McEnany during a news conference at the White House whether Trump had actually ordered officials to slow testing.”No, he has not directed that,” McEnany said. She added that “any suggestion that testing has been curtailed is not rooted in fact.””It was a comment that he made in jest,” she said.Pressed about the appropriateness of making light of the topic of the coronavirus that has killed more than 120,000 Americans, McEnany said Trump was “joking about the media and their failure to understand the fact that when you test more you also find more cases.”

Asked whether he was kidding when he claimed at his Tulsa rally he had instructed officials to slow down COVID-19 testing, Pres. Trump says, "I don't kid."Yesterday, press sec. Kayleigh McEnany told @bgittleson the comments had been "in jest." https://t.co/GrOTl6q63h pic.twitter.com/oT64RoeHBJ

In another interview recorded Monday, Trump was asked explicitly whether his comment had been “tongue in cheek.”“It’s semi-tongue in cheek,” the president told the Christian Broadcasting Network k. “I say it all the time. I know some people thought it was tongue in cheek. It’s unfair. We’re doing so much testing, so much more than any other country. And to be honest with you, when you do more testing, you find more cases.”Asked if he ordered his staff to stop coronavirus testing, Trump said: “No, but I think we put ourselves at a disadvantage. I told my people. I said, ‘We’ve gotten so good at testing."””Instead of doing 25 million tests, let’s say we did 10 million tests,” he added. “We’d look like we were doing much better, because we’d have far fewer cases.”Apparently in reference to whether he told them to stop testing, he added: “I wouldn’t do that. But I will say this. We do so much more than other countries. It makes us, in a way, look bad, but actually we’re doing the right thing.”But then, one day later, Trump contradicted not just his aides but himself.It was not the first time Trump and the White House press secretary found themselves in discord trying to explain a controversial comment from the president.In April, after Trump was widely criticized for suggesting that an “injection” of a “disinfectant” could be used to treat coronavirus, McEnany first argued the comment had been taken out of context. Hours later, Trump said he had been speaking “sarcastically.”On Tuesday, asked by a reporter outside the White House if he was kidding or if he had a plan to slow down testing, Trump replied: “I don’t kid.”As he had done Saturday, Trump explained that more testing leads to a higher number of coronavirus cases — which can be true in absolute terms, but according to public health experts is not the sole reason for rising infection rates in many cities and states across the country. Testing a larger portion of the population can actually also lead to a decrease in the percentage of people who test positive​, since with more tests available, people less likely to actually be infected — who would not have gotten tested before — get tested at a higher rate.Despite those facts, Trump repeated his argument that “the reason we have more cases than other countries is because our testing is so much.”He did not directly answer if he wanted testing in the U.S. slowed, instead explaining that “testing is a double-edged sword.””In one way, it tells you you have cases,” he said. “In another way, you find out where the cases are and you do a good job.”A couple of hours later, two top U.S. public health officials, infectious disease expert Anthony Fauci and the coordinator of coronavirus testing at the federal level, Adm. Brett Giroir, said during a hearing on Capitol Hill Tuesday that neither Trump nor anyone in the administration had ever told them to slow testing. Copyright © 2020, ABC Audio. All rights reserved.

President Trump says he approved TikTok deal with Walmart, Oracle in ‘concept’
Amy Coney Barrett front-runner on Trump list of potential Justice nominees: Sources
Trump calls on Senate Republicans to act ‘without delay’ on SCOTUS pick
DHS whistleblower may not appear before Congress next week, lawyer says
Black man beaten by Georgia deputy speaks out after release from jail: ‘I feared for my life’
CDC reverses testing guidelines after report of interference