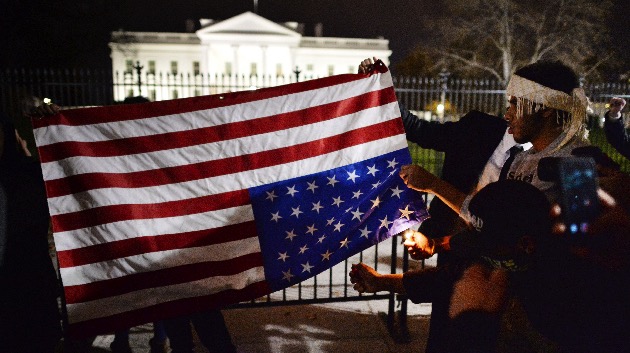 MLADEN ANTONOV/AFP via Getty ImagesBy JACK ARNHOLZ, ABC News(WASHINGTON) — Police in Washington, D.C, announced Wednesday that they made nine arrests and used “sting balls” and pepper spray on protesters after saying they set fires, threw projectiles and Molotov cocktails in overnight clashes, including near the White House.Demonstrations flared as protesters called for the removal of more federal statues — with some seeking to form a so-called “autonomous zone” blocks away from the White House.After reports that some demonstrators outside the White House had lit an American flag on fire, President Donald Trump took to Twitter again Tuesday night to blast the protests, saying, “It is a shame that Congress doesn’t do something about the lowlifes that burn the American Flag. It should be stopped, and now!”Trump on Tuesday threatened to arrest and prosecute protesters who on Monday night had tried to pull down a monument of President Andrew Jackson, a Trump favorite, in Lafayette Park across from the White House before police intervenedOn Wednesday, fencing around the park and in front of St. John’s Church that had been taken down after the height of the protests in the wake of George Floyd’s killing was back up and concrete barriers were installed.Some protesters countered by trying to establish a police-free “Black House Autonomous Zone” outside the church where President Donald Trump held a photo-op on June 1.Trump fired back at those protesters on Twitter Tuesday morning writing, “There will never be an ‘Autonomous Zone’ in Washington, D.C., as long as I’m your President. If they try they will be met with serious force!”Twitter placed a warning on the message saying it violated its abusive behavior rules.While the city cleared out tents and signs protesters used in their effort to establish the ‘autonomous zone’ Monday, D.C. police clashed with protestors Tuesday — blocking their attempts to set up the area, firing flash bangs and smoke devices to clear the area.D.C. Police Chief Peter Newsham told the Washington Post the police action was not in response to Trump’s tweet.Other protesters gathered across the city in Capitol Hill’s Lincoln Park last night, calling for the removal of a controversial statue of President Abraham Lincoln. Demonstrators rallied against the Emancipation Memorial, which depicts a freed slave kneeling at Lincoln’s feet.Del. Eleanor Holmes Norton, D-D.C., said Tuesday that she is introducing a bill into the House of Representatives to remove both the Jackson statue from Lafayette Park and the “Emancipation Statue” from Lincoln Park across the city from the White House, near the Capitol.“The statue of Andrew Jackson, who himself enslaved African Americans, compounds this insult,” Holmes Norton said in a statement.“This prominent location in the nation’s capital, right outside of the White House, should never have honored a man who owned slaves and was responsible for the deaths of roughly 4,000 Native Americans. Jackson’s entire tenure is a shameful part of our history, and I will see to it that he is no longer honored with a statue in Lafayette Park.”Copyright © 2020, ABC Audio. All rights reserved.