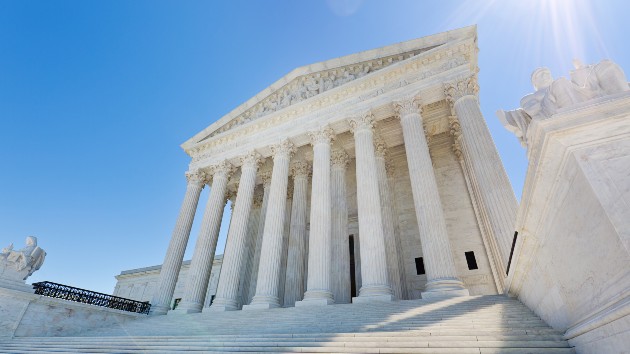 YinYang/iStockBy DEVIN DWYER, ABC News(WASHINGTON) — At his Senate confirmation hearing in 2005, John Roberts famously compared the role of Supreme Court chief justice to an umpire.”It’s my job to call balls and strikes, and not to pitch or bat,” he said at the time. Fifteen years later, Chief Justice Roberts’ calls in a series of cases are attracting intense scrutiny, unsettling conservatives angered by the outcomes — and sowing angst among liberals skeptical about the permanence of their victories.”This month has been ‘Blue June’ for legal conservatives,” said Josh Blackman, a constitutional law professor at South Texas College of Law and conservative legal scholar. “Chief Justice Roberts voted with the progressive wing on abortion, immigration and Title VII.”In a span of three weeks, the Supreme Court — in narrow majorities that included Roberts — struck down a Louisiana abortion law; blocked President Donald Trump from immediately ending the Deferred Action for Childhood Arrivals program; and affirmed federal civil rights protections for LGBTQ Americans.Some outraged legal conservatives have accused Roberts, who was appointed by Republican President George W. Bush, of betrayal.”The Louisiana regulation here was on even stronger legal footing, but the chief instead decided to play politics,” said Carrie Severino, president of the Judicial Crisis Network, a right-wing legal advocacy group.At the same time, Roberts has joined the majority in a series of cases that have been victories for the Trump administration, including a decision granting the president greater control over the Consumer Financial Protection Bureau and a ruling upholding Trump’s ability to fast-track removal of asylum seekers whose claims have been denied.”Chief Justice Roberts is the most interesting justice on the court right now. But he’s also the one who is hardest to figure out, both because he keeps his cards close to the vest and because his rulings don’t fit consistently into advancing left or right politics,” tweeted UC Berkley law professor Orin Kerr, a former clerk to Justice Anthony Kennedy.The Roberts court has also affirmed Trump’s policy to keep migrants in Mexico while awaiting a hearing with an American immigration judge, and on Monday, declined to take up an environmental challenge to Trump’s border wall.Liberal legal advocates warned Monday that Roberts cannot be trusted.”He is a shrewd political actor who cares about public perception of the court,” said Aaron Belkin, executive director of Take Back the Court, a left-wing group.Belkin called Roberts’ opinion in the Louisiana abortion case “an open invitation for the next state that wants to dismantle (Roe v Wade) under a slightly different veneer than the one chosen by Texas and Louisiana.”Roberts, who opposes abortion, made clear that his position in the Louisiana case was a narrow one and that other state abortion laws would be examined on a case-by-case basis.”The chief is single-mindedly focused on keeping the court out of the headlines and charting a narrow course in this election year,” said Blackman.Roberts, an avowed institutionalist, has been deeply concerned about politicization of the court. Legal experts say the fact that his positions in high-profile cases are upsetting activists on both ends of the political spectrum reflects an effort to bolster the court’s image as fair and impartial.”Roberts cares deeply about the court appearing to stand outside of politics,” said Cardozo law professor Kate Shaw, an ABC News contributor and former clerk to Justice John Paul Stevens.Shaw said Roberts’ alignment with the court’s liberal justices in the Louisiana abortion case signals that he’s not a rubber stamp for the party in control of the White House.”I suspect he believed that if the court changed course in this case — just four years after striking down an identical Texas law — it would send a strong message that the justices on the current court are there to implement the policy preferences of the presidents who appointed them,” Shaw said. “And that’s just not how he understands the role of the court.”Roberts rarely speaks in public, but in a speech late last year he make a point of insisting that the justices do not “go about our work in a political manner.”Of the 19 decisions last term decided by a 5-4 vote, just seven were decided by the majority of justices appointed by Republican presidents.”When you live in a politically polarized environment, people tend to see everything in those terms,” Roberts said in September 2019. “That’s not how we at the court function, and the results of our cases do not suggest otherwise.”Over the last four years, public approval of the U.S. Supreme Court has been steadily on the rise. Fifty-four percent of Americans approve of the way the justices are doing their job, according to the most recent Gallup poll. Confidence in the court rose during the same period as well. Copyright © 2020, ABC Audio. All rights reserved.