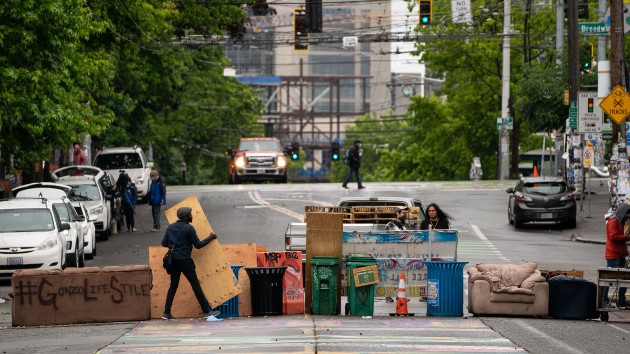 David Ryder/Getty ImagesBy EMILY SHAPIRO, ABC News(SEATTLE) — Following “ongoing violence and public safety issues,” Seattle’s mayor has issued an executive order to clear the Capitol Hill Organized Protest (CHOP) zone — a several block, autonomous police-free zone — and Seattle police enforced the order Wednesday morning. Seattle Police Chief Carmen Best said in a statement, “This order, and our police response, comes after weeks of violence in and around the Capitol Hill Occupied Protest zone, including four shootings, resulting in multiple injuries and the deaths of two teenagers.” “I support peaceful demonstrations,” Best said, adding, “the CHOP has become lawless and brutal. Four shootings — two fatal — robberies, assaults, violence and countless property crimes have occurred in this several block area.”Police began issuing dispersal orders early Wednesday, and as of approximately 5:20 a.m. local time, officers made about 10 arrests, the department said.The CHOP zone was formed after explosive standoffs between protesters and Seattle police after the death of George Floyd, a Black man in Minnesota who died while in police custody. Following days of clashes, Seattle police on June 8 largely withdrew from the Capitol Hill district, leaving a void for protesters. The protesters seized a roughly six-block area, including the east precinct, to create an “autonomous police-free zone.”The zone remained for weeks, and Seattle Mayor Jenny Durkan told ABC News’ Nightline last month that it required time and distance to de-escalate the tensions between the people and police. “We need to have some time for people to feel that they have had the ability to protest and raise their voices and have the time to work, not just with the people on Capitol Hill but with all of Seattle,” she said. “These protests are protests fundamentally about a policing system that has tried to dominate Black Americans through the history of our country. You don’t meet those protests with domination. You meet them with listening and with change,” Durkan said. Copyright © 2020, ABC Audio. All rights reserved.