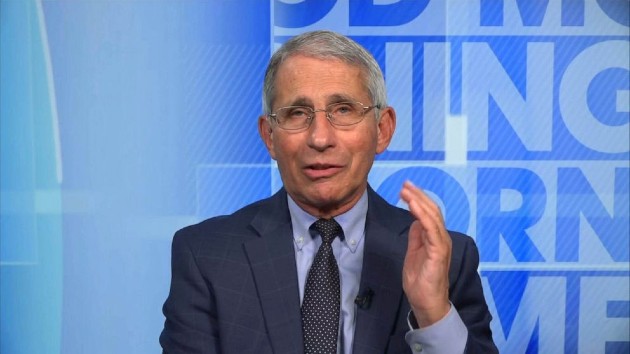 ABC NewsBy EMILY SHAPIRO and BEN GITTLESON, ABC News(NEW YORK) — Dr. Anthony Fauci says he’s concerned about the Midwest reopening, noting that hard-hit South and West states like Florida, Texas, Arizona and California look like “they may be cresting and coming back down.” States like Ohio, Indiana, Tennessee and Kentucky are “starting to have” a “very early indication” of rising COVID-19 positivity rates — a “surefire sign that you’ve got to be really careful,” Fauci told ABC News chief anchor George Stephanopoulos on Good Morning America Tuesday.The director of the National Institute of Allergy and Infectious Diseases urged states to reopen in a manner consistent with the federal government’s guidelines for reopening.If the guidelines are followed, Fauci said, “I think we can prevent the surges that we’ve seen in the southern states, because we just can’t afford, yet again, another surge.” Asked if the U.S. needs a coordinated, national reopening strategy, Fauci pointed to the guidelines the federal government had already released and asked states to “rethink what happens when you don’t adhere to that.”Fauci also responded to a claim retweeted by President Donald Trump that said the Centers for Disease Control and Prevention and doctors are “lying.” Trump two weeks ago retweeted a post from former Wheel of Fortune host and conservative commentator Chuck Woolery, who wrote, “Everyone is lying. The CDC, Media, Democrats, our Doctors, not all but most, that we are told to trust. I think it’s all about the election and keeping the economy from coming back, which is about the election.””I don’t know how to address that. I’m just going to certainly continue doing my job,” Fauci said. “You know, I don’t tweet. I don’t even read them.” “This is what I do, this is what I’ve been trained for my entire professional life, and I’ll continue to do it,” Fauci said. “I have not been misleading the American public under any circumstances.” Fauci also addressed hydroxychloroquine, the drug Trump self-administered that has since had its emergency authorization revoked by the Food and Drug Administration. Trump on Monday night tweeted his praises of hydroxychloroquine, but Fauci told GMA, “The overwhelming, prevailing clinical trials … have indicated that it is not effective in coronavirus disease.”

What big city mayors are saying about gun control

What some lifelong gun owners say about AR-15s

What we know about the Tulsa mass shooting victims