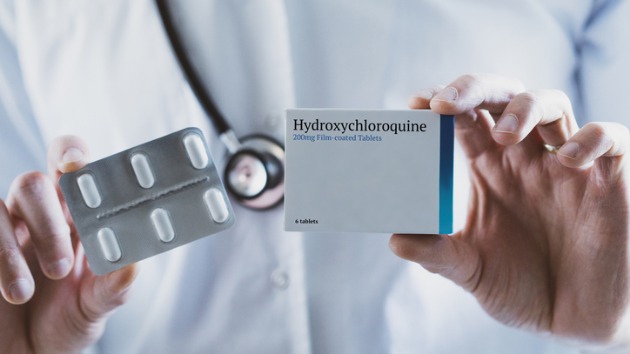 BartekSzewczyk/iStockBy LUCIEN BRUGGEMAN, ABC NEWS(WASHINGTON) — President Donald Trump’s recent social media promotion of a video supporting hydroxychloroquine, despite both the National Institute of Health and the Food and Drug Administration already dismissing the antimalarial drug’s efficacy in treating COVID-19, has broadened the rift between him and several of his top public health officials.The ongoing war of words over the drug led the nation’s top infectious disease expert, Dr. Anthony Fauci, to reiterate that the drug “is not effective” in treating the virus, while FDA Commissioner Dr. Stephen Hahn recently lamented that it had become “politicized” in the midst of a pandemic.The video, which Twitter later removed for violating its “misinformation policy,” showed a group of doctors downplaying the effectiveness of masks and lockdowns and praising the efficacy of hydroxychloroquine.“The overwhelming, prevailing clinical trials that have looked at the efficacy of hydroxychloroquine have indicated that it is not effective in coronavirus disease,” Fauci told George Stephanopoulos Tuesday on “Good Morning America,” just hours after the president’s retweet Monday night. Fauci has also vocally supported the wearing of masks and preventative lockdowns.Before that, in an interview with ABC News as part of its sweeping “20/20″ investigation “American Catastrophe: How Did We Get Here?”, Hahn acknowledged that the president’s infatuation with the drug has “politicized” the government’s response to the crisis.“I think we can all agree that the issue of hydroxychloroquine has become politicized,” Hahn said. “And it’s a shame because … public health emergencies shouldn’t be about politics.”Tune in to ABC on Tuesday at 9 p.m. ET for the “20/20” special report “American Catastrophe: How Did We Get Here?”Hahn defended his agency’s decision initially to grant an emergency use authorization (EUA) for hydroxychloroquine, noting that the government’s move to do so was based “upon the available data at the time.” Hahn added that as additional information emerged, the his agency revoked its EUA earlier this month.“Nothing other than the data and science goes into our decision about revocation,” he said.“The president has been very clear about this: It might work. It might not work,” Hahn continued. “We have to have the data to figure this out. That’s what happened with respect to this EUA as we collected that data. We saw the data.”In June, after finding that hydroxychloroquine “was very unlikely to be beneficial to hospitalized patients with COVID-19,” the National Institute of Health abandoned clinical trials of the drug.In its July 1 announcement revoking its emergency use authorization, the FDA warned that hydroxychloroquine can cause “heart rhythm problems and other safety issues, including blood and lymph system disorders, kidney injuries, and liver problems and failure” — though it remains a effective in treating malaria, lupus, and rheumatoid arthritis.Even so, the president’s advocacy of the drug has remained consistent. In May, Trump said he himself had been taking the drug for nearly two weeks with no side effects.The president and his close political advisors have repeatedly come into conflict with the administration’s public health experts. This friction reached a fever pitch earlier this month when the president’s trade advisor, Peter Navarro, penned an op-ed in USA Today critical of Fauci. The White House later distanced the president from Navarro’s comments, and Trump himself said Navarro “shouldn’t be doing that.”Experts said the president’s repeated support of the drug’s prospects – and more broadly his tendency to politicize science and medicine – despite significant evidence to the contrary has contributed to the government’s muddled response to the crisis.In an interview with ABC News in May, Trump generally defended his public, positive pronouncements about developments in the virus fight — even if they later proved wrong.”I don’t want to be Mr. Gloom and Doom. It’s a very bad subject,” Trump told ABC News “World News Tonight” Anchor David Muir. “I want to be a cheerleader for our country… I want to be optimistic.”Copyright © 2020, ABC Audio. All rights reserved.

Clock is ticking on the Senate’s gun deal: Negotiators stuck on two issues as recess looms

6 in 10 Americans say Trump should be charged for Jan. 6 riot: POLL