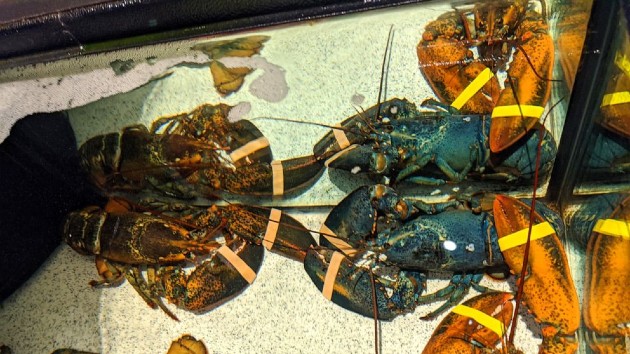 Akron Zoo/FacebookBy JON HAWORTH, ABC News(NEW YORK) — An incredibly rare blue lobster was saved from certain death by, perhaps ironically, Red Lobster employees after he was delivered to their restaurant in a food delivery.After eagle-eyed employees at a Cuyahoga Falls, Ohio, Red Lobster establishment spotted the rare crustacean, they decided to contact conservationists at the Monterey Bay Aquarium in California to inform them of their discovery.The Monterey Bay Aquarium then got in touch the Akron Zoo to see if they would be interested in housing the rare animal dubbed “Clawde” by the Red Lobster employees who discovered him and gave him the same moniker as the restaurant chain’s mascot.“The connection between the Akron Zoo and Red Lobster came from a conservation partnership called Seafood Watch,” Akron Zoo said in a social media statement posted online. “The program, run by the Monterey Bay Aquarium, strives to help consumers and businesses choose seafood that is farmed sustainably and fished in ways to support a healthy ocean. Both the Akron Zoo and Red Lobster are conservation partners with Seafood Watch.”According to the Akron Zoo, their animal care staff quickly jumped into action to prepare a new home at the zoo in a special tank called “Clawde’s Man Cave.”The Akron Zoo said that the blue coloration of the shell is the result of a genetic anomaly and estimates that this rare occurrence happens in one out of every two million lobsters.However, thanks to quick thinking Red Lobster employees, Clawde’s life was spared and he now resides in the Komodo Kingdom building at the Akron Zoo where he will live out the remainder of his days. Copyright © 2020, ABC Audio. All rights reserved.