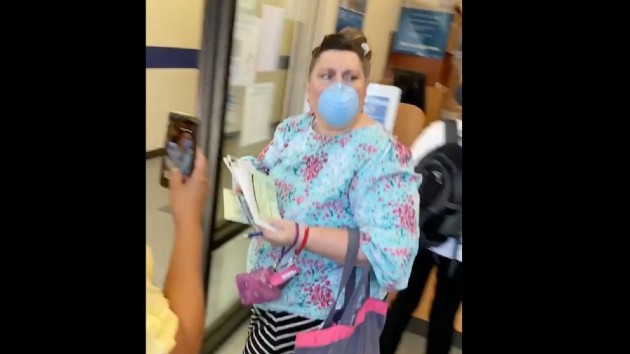 Courtesy Tyler BrumfieldBy IVAN PEREIRA, ABC News(LOS ALTOS, Calif.) — The U.S. Postal Service condemned the actions of a white customer who was filmed shouting slurs at an Asian American employee at a California post office.On Thursday, an unidentified woman was seen arguing with the employee at the booth inside the post office on Main Street in Los Altos, according to footage recorded and shared online by Tyler Brumfield who was on line. The woman is seen in the video screaming at the Asian American employee, “Can you just do your job? It’s simple,” and using an epithet under her breath.Brumfield and other post office patrons are then heard calling out the customer for her language.”That’s not acceptable. No, it’s not. Totally not OK,” Brumfield is heard saying.The customer was then filmed walking out of the post office and shouting the epithet louder while looking directly into Brumfield’s camera.Brumfield told ABC affiliate KGO-TV that he and the other people on line were stunned.”We are all humans and we should respect each other as such, because someone is different or has different melanin doesn’t mean we have to disregard the humanity of that particular person,” Brumfield said.Augustine Ruiz, a spokesman for the USPS, condemned the incident and said that customers should treat all of their employees with courtesy.”No employee should have to suffer any abuse by a customer, and we have every right to refuse service to anyone who is abusive,” he said in a statement.The American Postal Workers Union didn’t immediately return ABC News’ request for comment.Roughly 7.6% of USPS workers identify as being Asian, Native Hawaiian or Pacific Islander, according to the USPS.Asian Americans in California have self-reported 832 incidents of discrimination and harassment in the last three months, according to a report released earlier in July by the nonprofit coalition Stop AAPI Hate.