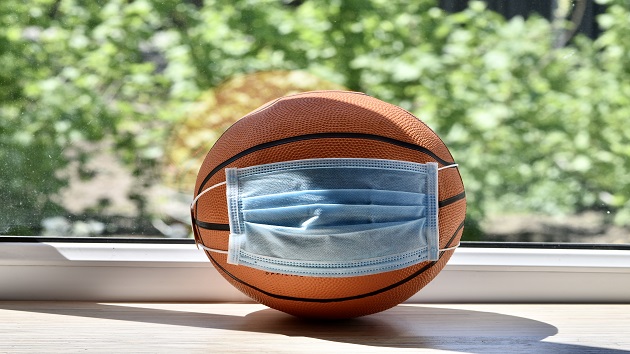 iStock/Vadim ZhakupovBY: KARMA ALLEN(NEW YORK) — As the National Basketball Association prepares to restart its season, commissioner Adam Silver acknowledged that the season likely would “cease completely” if a coronavirus outbreak occurred within the league’s carefully crafted pandemic bubble.Silver’s comments came as Major League Baseball’s Miami Marlins announced that 18 combined players and coaches had contracted the virus, hampering baseball’s long-awaited return and casting doubt on the current sustainability of live sports. After halting play back in March, the NBA is set to restart the 2019-20 season on Thursday with all games scheduled to take place inside the NBA’s Walt Disney World bubble in Orlando. No fans will be in attendance.Silver said any outbreak similar to MLB’s would halt the entire NBA season: “If we had any significant spread at all, we’d immediately stop and what we’d try to do is to track and determine where they’re coming from.”Here’s a look at how the NBA and other major leagues are approaching their returns this year amid soaring infection rates in much of the U.S.:NBALeague officials, including team owners, team presidents, general managers, head coaches and high-ranking league executives, held a conference last week, laying out all the things that could grind the season to a halt.Officials said they would be quick to postpone games or pause the entire season to stem an outbreak.Officials said they would consider a stoppage for a number of reasons, including if an entire position group suddenly became ill with COVID-19 or if six or more clubs were unable to play for multiple weeks.Among the 344 players tested for COVID-19 on the NBA campus, none returned confirmed positive tests, officials said Wednesday.The 2019-20 NBA season is set to resume Thursday night with the New Orleans Pelicans taking on the Utah Jazz and the Los Angeles Lakers facing the LA Clippers in a doubleheader on TNT.At least two LA Clippers players, Lou Williams and Montrezl Harrell, will be missing from Thursday’s game due to quarantine orders.Williams was placed under a 10-day quarantine after he stopped at an Atlanta strip club on his way back from an excused absence due to a family matter. Harrell left the bubble last week to deal with a personal matter and has yet to return. He will have to isolate for at least four days when he rejoins the team.MLBMLB postponed several games this week after at least 18 Miami Marlins players and coaches tested positive, triggering a league-wide investigation.The league now will require teams to travel with a compliance officer to make sure players and staff follow protocols, ESPN reported.MLB officials are urging players to stay inside their hotels with the exception of leaving for games and are encouraging players to use surgical masks instead of cloth masks while traveling, according to ESPN.NFLThe National Football League, the largest pro sports league in the country, started training earlier this week, making it the latest to take on the novel coronavirus.The league canceled its preseason and altered training camp as the COVID-19 pandemic took shape. Dozens of players, including Kansas City Chiefs Super Bowl LIV champion Damien Williams, have opted out of the season due to the fast-spreading virus, which experts say can be transferred person-to-person and spread through the air under certain conditions.NFL officials have vowed to test players and essential staff members daily.Players or staffers with symptoms are required to wait at least 10 days after a positive test, go 72 hours without symptoms and then test negative before they can be approved by a team doctor to return, league officials said.The regular NFL season is still scheduled to kick off on Thursday, Sept. 10, with the Super Bowl champion Kansas City Chiefs taking on the Houston Texans.National Hockey LeagueSimilar to the NBA, the National Hockey League is scheduled to hold its 2019-20 season in secure zones, in Toronto and Edmonton.The league has games scheduled in home cities across 22 Canadian states. NHL officials said players, coaches and key staff members will be tested daily and live in hotels during the coming season.In addition to hosting on game day, the hub cities, or secure zones, will include restaurants, hotels and practice facilities for the league’s 24 participating teams, but fans will not be allowed inside the arenas.Some team executives, including Maple Leafs general manager Kyle Dubas, said the bubbles could serve as a disadvantage for some players, especially when they’re forced to quarantine away from family.”There’s a bit of familiarity with the rink and the facilities in the rink, but there are no fans in the rink, so we don’t have that advantage,” Dubas told reporters earlier this month.The league is scheduled to resume play with five games in the Stanley Cup Qualifiers on Saturday.NWSLAfter delaying the regular season, the National Women’s Soccer League went became the first professional sports league to return to play in United States with the 2020 Challenge Cup in Utah.NWSL officials managed to conclude the tournament on Sunday without any positive COVID-19 tests, giving a glimmer of hope to sports fans around the world about the possibility of finishing a full season.Things seemed shaky ahead of the tournament as the Orlando Pride withdrew due to an outbreak within the team as infection rates soared in Florida.New NWSL Commissioner Lisa Baird credited the ultimate success to the bubble-like environment officials created in Utah along with a batch of strict health and safety protocols.Players, coaches and staff were required to stay within the hotel village even when they weren’t playing or training, officials said. They had round-the-clock access to indoor gyms, restaurants and open spaces, but they were essentially in isolation for a month straight, according to the league.They also were given access medical experts and therapists to help cope with the transition.

MLSFC Dallas and Nashville SC were forced to withdraw from the MLS is Back Tournament, which began in Orlando last week, when about a dozen players contracted the virus.Major League Soccer officials said they asked the teams to withdraw as a precaution and because it was in the best interests of players and staff.”Given the impact of the number of positive tests on the club’s ability to train and play competitive matches, we have made the decision to withdraw FC Dallas from the MLS is Back Tournament,” MLS Commissioner Don Garber said in a statement. “The health of everyone involved in our return to play has always been our top priority, and we will continue to make decisions consistent with that priority.”MLS has provided regular testing updates on its website with aggregated COVID-19 testing results for all players and staff participating in the MLS is Back Tournament.WNBAAt least a dozen WNBA players decided to sit out the 2020 season earlier this month after seven of the league’s 137 players tested positive for COVID-19 ahead of the season kickoff at IMG Academy in Bradenton, Florida.Brooklyn Nets star Kyrie Irving announced a new $1.5 million initiative on Monday to officer financial support to active WNBA players who choose to sit out the season due to “personal, professional, health, and/or safety-related reasons.””Whether a person decided to fight for social justice, play basketball, focus on physical or mental health or simply connect with their families, this initiative can hopefully support their priorities and decisions,” Irving said in a statement.All 22 WNBA games will be played at the IMG Academy without fans.

Women’s tennisAustralian tennis star Ashleigh Barty, the top-ranked singles player in women’s tennis, shocked fans around the globe on Thursday when she announced that she would not play the in either the Western & Southern Open or the U.S. Open, citing COVID-19 concerns”I love both events so it was a difficult decision but there are still significant risks involved due to COVID-19 and I don’t feel comfortable putting my team and I in that position,” Barty said in a statement.U.S. Open 2011 champion Sam Stosur said she will also skip the tournament in an effort to avoid mandatory quarantines and risking her newborn’s health.The U.S. Open main draw is scheduled to begin on Aug. 31.The Western & Southern Open, which is normally held in Mason, Ohio, will be held at the USTA Billie Jean King National Tennis Center in New York Aug. 20-28.