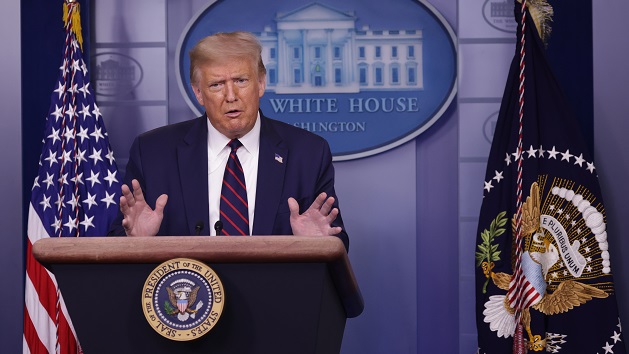 Alex Wong/Getty ImagesBy LIBBY CATHEY, ABC News(WASHINGTON) — President Trump tweeted about suburbanites and low-income housing after repealing a rule designed to address racial segregation in suburban housing.A week after his administration overturned an Obama-era housing rule intended to fight racial segregation, President Donald Trump boasted about the rollback in a series of tweets and remarks, stirring racist fears in an attempt to court white conservative suburban voters months out from the election.But polling shows suburban voters currently disapprove of the president’s job in general — and even more so his handling of race relations.”You know the suburbs, people fight all of their lives to get into the suburbs and have a beautiful home,” Trump said Wednesday in Midland, Texas. “There will be no more low-income housing forced into the suburbs.”

Black, Native American and Hispanic households are more likely than white households to be low-income renters, according to numerous housing reports.Trump said the Obama-era rule, which sought to lessen the impact of decades of racial segregation in America’s neighborhoods, has been “hell for suburbia” and told the audience to “enjoy your life.”The remarks Wednesday echoed tweets from earlier in the day, when Trump claimed that people “living their Suburban Lifestyle Dream” won’t have to be “bothered” financially or with crime by having “low income housing built in your neighborhood.”His attempt to pitch it as a boon to voters has his critics arguing he’s dismantling civil rights for a political advantage. Sen. Chris Murphy, D-Conn., wrote on Twitter, “Oh my. I mean, it’s not even a dog whistle anymore. Our President is now a proud, vocal segregationist.”It all follows a pattern of language the president has been using for weeks as he ramps up attacks on former Vice President Joe Biden.Trump is again counting on the suburban voters he won in 2016 — apparent by his repeated false and fear-invoking claims that Democrats want to “abolish” suburbs — but his divisive rhetoric may not be working this time around.A recent ABC News/Washington Post poll showed the president trailing Biden in those neighborhoods by 9% — the largest margin in the suburbs that polls have recorded since the 1980s, when Republicans were winning there by double digits.And a New York Times/Siena College poll from June found 38% of voters in the suburbs approve of Trump’s job performance compared with 59% who disapprove. The key demographic disapproved of Trump’s handling of recent protests and race relations by an even wider margin, according to the Times.The Trump administration last Thursday officially dismantled the Affirmatively Furthering Fair Housing, or AFFH, rule from 2015, which required local governments to identify and address patterns of racial segregation outlawed under the Fair Housing Act of 1968. The rule tied federal funding to efforts to bridge inequalities.Trump’s attacks on the AFFH, which overwhelmingly helped low-income and minority households, also come amidst housing uncertainty for renters due to the ongoing coronavirus pandemic.The decision will likely have little immediate practical impact because the agency hadn’t enforced the rules since 2018. Instead, the plan by the Department of Housing and Urban Development appears pinned on politics.Housing Secretary Ben Carson said he was replacing the rule with a plan that more loosely defines the standard for fair housing as access to an affordable and safe residence. He called the current rule “a ruse for social engineering under the guise of desegregation.”But critics say rescinding it will allow for greater discrimination and harm minority households.They point to numerous studies that have revealed a long tradition of policies that have kept Black, Native American, and Hispanic households out of white suburbs, along with other forms of housing discrimination they face.”Vile, despicable, racist,” Diane Yentel, president of the National Low Income Housing Coalition, tweeted in response to Trump Wednesday.The NLIHC is one of 14 fair housing and anti-racism groups that issued a joint statement last week condemning the Trump administration’s actions.”Secretary Carson has worked to undermine fair housing since the day he stepped into the HUD building, so this action is not surprising. But it is abhorrent for Trump to use a critical fair housing tool for election year race-baiting, particularly during a time of reckoning for racial injustices,” Yentel said.Lisa Rice, president and CEO of the National Fair Housing Alliance, told NBC News in January when Carson issued a proposal to essentially eliminate the rule, “what HUD has released is not a rule to affirmatively further fair housing.””It significantly weakens fair housing compliance, entrenches segregated housing patterns, and continues the status quo in which some communities are strengthened by taxpayer-supported programs and amenities while other neighborhoods are starved and deprived of opportunities,” Rice said.Even major entities, like Bank of America, and political contributors, such as the National Association of Realtors, had urged the Trump administration against the move. The National Association of Realtors argued “now is not the time” to change a policy that could hinder progress against systemic racism.Many say rescinding the rule also ignores the financial reality of millions of Americans already left behind.Recent data shows that no state has an adequate supply of affordable rental housing for low-income renters.A report from the National Low Income Housing Coalition found that for every 100 extremely low-income renter households only 36 affordable homes are available.In some states, like Nevada, the situation is even more dire, with only 18 homes available for 100 households.Advocates argue that one of the most impactful solutions to problems around homelessness, which Trump has also criticized, is to ensure more affordable and accessible housing.ABC News’ Anne Flaherty, Jordyn Phelps and Stephanie Ebbs contributed to this report.Copyright © 2020, ABC Audio. All rights reserved.