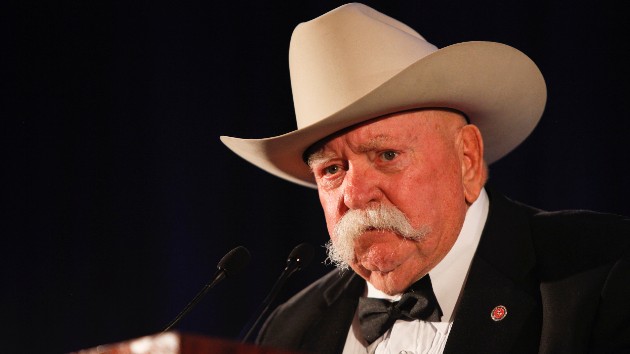 Imeh Akpanudosen/Getty Images(UTAH) — Wilford Brimley, the actor known for such films as Cocoon and The Natural, has died at 85.His manager, Lynda Bensky, confirmed to The Hollywood Reporter that he passed away on Saturday morning in a Utah hospital. He had been on dialysis and had other medical issues, Bensky said.”Wilford Brimley was a man you could trust,” Bensky said in a statement to THR. “He said what he meant and he meant what he said. He had a tough exterior and a tender heart. I’m sad that I will no longer get to hear my friend’s wonderful stories. He was one of a kind.”The mustached Salt Lake City native had a colorful life before catching his big break, serving as a blacksmith, rodeo rider, Hollywood extra and bodyguard for Howard Hughes. He scored a role in 1979’s The China Syndrome opposite Jack Lemmon, and later landed a part in Sydney Pollack’s 1981 film Absence of Malice. Roles in films like Tender Mercies, Cocoon, and The Natural followed. Brimley also became famous for his commercial work touting Quaker Oats and diabetes testing. He embraced being known as the “diabeetus guy” after his pronunciation of the word sparked countless memes across the Internet.More recently, Brimely appeared in the 2009 film Did You Hear About the Morgans?, starring Hugh Grant and Sarah Jessica Parker.Brimley is survived by his second wife Beverly and three sons.