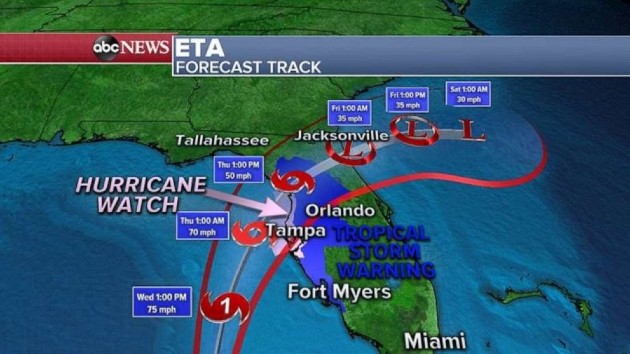 By MAX GOLEMBO, ABC News(NEW YORK) — The threat from Eta is back for the U.S. and the cyclone is strengthening Wednesday morning in the eastern Gulf of Mexico as it moves north.Eta is currently a strong tropical storm with winds of 70 mph, just 4 mph short of being a Cat 1 hurricane, and because of this, a Hurricane Watch has been issued for the Tampa Bay area.Eta is looking robust on the satellite Wednesday morning, showing a tight circulation center and could easily become a hurricane again.Eta is forecast to move north Wednesday and possibly become a Category 1 hurricane with winds of 75 mph.By Thursday late morning, Eta will be nearing Florida’s northwest coast but, at this time, it looks like water temperatures in the northwest Gulf of Mexico are cooler and this could help to possibly weaken Eta.The storm could make landfall early Thursday afternoon as a strong Tropical Storm with winds of 60 to 70mph and the National Hurricane Center has issued a Hurricane Watch for a portion of Florida.After Thursday, Eta will weaken as it moves past Jacksonville and into the Atlantic Ocean.Flood Watches have been posted from southern Florida all the way to Virginia as Eta moves north.The storm’s moisture will combine with an approaching front and this combination could bring very heavy rain to the Eastern U.S. making flash flooding possible. Locally, half a foot of rain is possible from Florida all the way to Virginia.In addition to Eta, we now have Theta in the far east Atlantic Ocean which could bring some high surf and rain to northern Africa and parts of southwestern Europe by this weekend.Elsewhere, a new tropical wave in the Caribbean could become our next tropical storm, which would be named Iota, and possibly bring more flooding rain to Central America.Meanwhile, in the Upper Midwest and the Rockies, 10 to 30 inches of snow fell from Colorado to Minnesota where hundreds of accidents and spinouts were reported and some roads were shut down.An ice storm brought down trees on homes and made roads very slick from Nebraska to Iowa to southern Minnesota.This same storm system will move east over the next 24 to 48 hours with heavy rain and a flooding threat for the East Coast.Copyright © 2020, ABC Audio. All rights reserved.