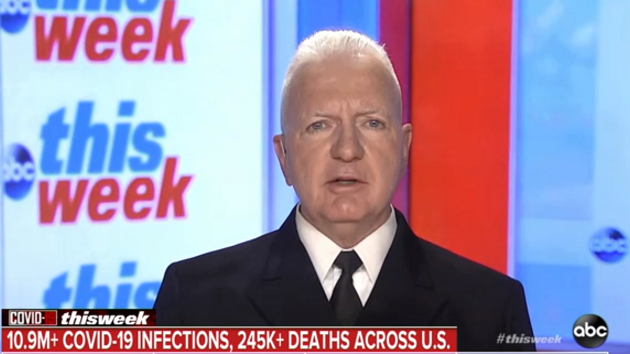 (WASHINGTON) — Assistant Secretary for Health Adm. Brett Giroir confirmed reports that President Donald Trump had not attended a coronavirus task meeting in five months, but said Sunday that he wasn’t concerned.”The vice president briefs the president every day or nearly every day on coronavirus, so I’m not concerned that the president doesn’t attend,” Giroir said on ABC’s “This Week.” “The vice president is there, Secretary Azar, the leadership that’s there, the scientific community, Dr. Birx, Dr. Fauci, myself, Dr. Hahn, Dr. Redfield. We’re all working and the docs work literally every single day together.”The news that Trump hadn’t attended a task force meeting in months was first reported by The Washington Post.Giroir went on to say Sunday that news of a potential vaccine that has been shown to be 90% effective is a “game changer,” but the country remains in a critical situation.COVID-19 cases are on the rise across the country, with more than 163,000 new cases identified Saturday, according to data from the COVID Tracking Project. A record number of people, more than 69,000, are hospitalized.Pfizer, a pharmaceutical company, announced Monday that a COVID-19 vaccine in late-stage trials appears to be 90% effective in an early analysis. Assistant professor of biostatistics and bioinformatics at Emory University’s Rollins School of Public Health, David Benkeser, told ABC News that’s “about as good as you could hope for at this point.”In a separate interview on “This Week,” President-elect Joe Biden’s transition COVID-19 advisory board member Dr. Atul Gawande said the team is “ready to go.””It is in the nation’s interest that the transition team get the threat assessments … understand the vaccine distribution plans, you need to know where the stockpiles are, what status is of masks and gloves,” Gawande said. “There’s a lot of information that needs to be transmitted. It can’t wait to the last minute.”Trump’s refusal to concede the election to Biden has prevented the transition process from formally beginning. The General Services Administration has yet to “ascertain” the winner of the election, leaving Biden and his advisers without the resources to ensure a smooth transition.On Friday, Trump’s representative to accelerate vaccine development Moncef Slaoui told the Financial Times that the Biden team should be given information about Operation Warp Speed, the administration’s program for developing the coronavirus vaccine. Slaoui said that he could not make contact with the Biden team without approval from the White House.Asked Sunday about the importance of a smooth transition between administrations for the pandemic response, Giroir said that while his team is transparent, the General Services Administration controls the process.”I want to be as transparent as possible with everybody, this is not a political issue” he added. “This is an issue of public health and saving American lives. And I think there’s nothing more important than that.”As for his recommendations on how to slow the spread of the virus, Gawande said that a “clear voice” from the top backing the national comprehensive plan could help get more Americans to believe scientist’s recommendations for preventing the spread of the virus.”We’ve lacked that. It’s led to disarray for the public, confusing messages,” he said. “That will change.”Giroir did make a point of reminding the public about basic precautions.”I want to tell the American people that we know what to do, we’ve done it many times before in the Sun Belt, in the South, the United Kingdom is doing that, and that is you must physically distance,” Giroir told “This Week” Co-anchor Martha Raddatz. “When you cannot physically distance, everybody needs to wear a mask in public spaces. That’s absolutely critically important. They do work.”While some Biden advisers previously mentioned the possibility of a six-week lockdown, Gawande said Sunday that the Biden team does not support a nationwide lockdown, favoring a more targeted approach.”We can get this under control,” Gawande said. “The critical parts are understanding what we’ve learned since we did a nationwide lockdown in early April. And that is that you can have targeted measures building on mask wearing, to include wide-spread testing, can include dialing up and down capacity restrictions. And those measures need to happen in a more localized basis.”