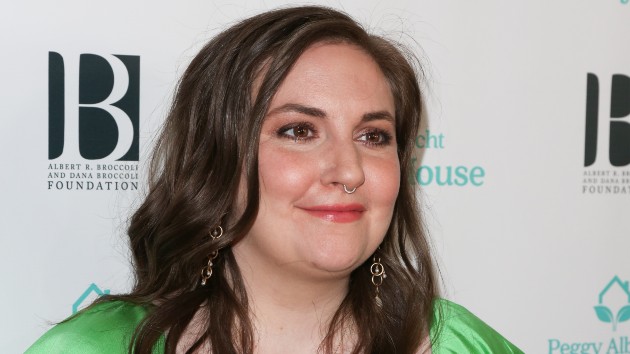 By LESLEY MESSER, ABC News (NEW YORK) — Lena Dunham is coming to terms with the fact that her road to parenthood is going to look different than how she initially imagined.In a personal essay for Harper’s Magazine, the former Girls star revealed that after having her uterus, cervix and one ovary removed due to chronic pain caused by endometriosis, she learned that her remaining ovary was still producing eggs.At that point, she stated, she underwent an in vitro fertilization cycle, using donor sperm, only to learn this past Memorial Day that none of her six embryos were viable. Although her doctor told her at that time that they could “discuss my ‘remaining options,"” she added, “He knew that I knew that there weren’t really any.””I was another cocky woman-to-be, sure that I would have what I wanted because I wanted it. Because I had always gotten it. Because the world told me it was mine to take,” she wrote. “It’s wild how far you can drift from yourself in the process of trying to get what you want. What started as wanting to carry the child of the man I loved became wanting to have a child with a man who was willing to help me have one. Soon that became hiring a lawyer to draft a contract for a sperm-donor friend and calling a surrogate who came highly recommended by another celebrity.””I was forced to admit just how much of it was about finishing what I started,” she continued. “I tried to have a child. Along the way, my body broke. My relationship did, too. In the process—because of it?—I became a functional junkie. I had lost my way, and a half-dozen eggs sitting in Midtown [Manhattan] promised to lead me home.”Dunham, 34, revealed in February 2018 that she’d undergone a hysterectomy at 31 after trying “pelvic-floor therapy, massage therapy, pain therapy, color therapy, acupuncture, [and] yoga” to treat her chronic pain. Several months later, she announced that her left ovary had been removed in a separate procedure.Endometriosis is an often painful disorder in which endometrial-like tissue grows outside of the uterus, according to the Mayo Clinic.ABC News’ chief medical correspondent, Dr. Jennifer Ashton, said the key with surgical treatment of endometriosis is two-fold: to reduce or remove scar tissue and/or to remove hormonal stimulation, which comes from the ovaries.”Ideally, women have as few surgeries as possible, but often with endometriosis multiple surgeries are common,” she explained in 2018. “With a young woman, if the ovaries are left in — one or both — she can continue to have residual pain even after a hysterectomy, because the microscopic implants or lesions respond to hormonal stimulation by the ovaries.”Although Dunham may not be able to have a biological child, she has not given up on becoming a mother. In fact, the actress and writer believes that her recent trials may inform how she parents a child one day.”There is a lot you can correct in life—you can end a relationship, get sober, get serious, say sorry—but you can’t force the universe to give you a baby that your body has told you all along was an impossibility. Weak animals die in the woods as their pack mates run ahead. Bad eggs don’t hatch. You can’t bend nature,” she wrote. “The irony is that knowing I cannot have a child—my ability to accept that and move on—may be the only reason I deserve to be anyone’s parent at all. I think I finally have something to teach somebody.”Copyright © 2020, ABC Audio. All rights reserved.

Only half of eligible Americans have gotten their first COVID booster

Think you have monkeypox? It might be another skin condition