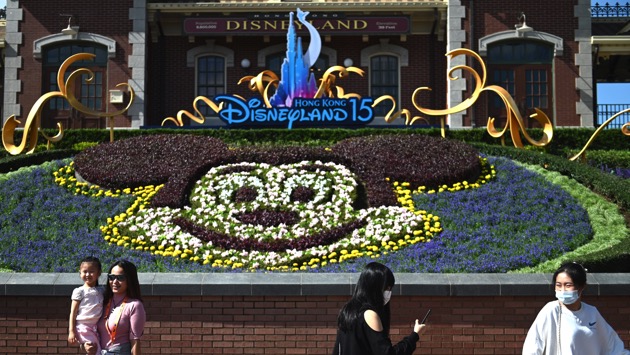 By BRITTYN CLENNETT, ABC News(HONG KONG) — Hundreds of revelers gathered at Hong Kong Disneyland on Friday to witness the opening of the resort’s reimagined Castle of Magical Dreams.The 167-foot-tall structure, nestled into the hills of Lantau Island, has been transformed over four years, more than doubling the height of the previous Sleeping Beauty Castle, itself a near-replica of Walt Disney’s original castle in Anaheim, California. The previous castle can still be seen embedded at the base of the new structure.It’s made up of 15 modules that were made off-site, then craned onto the existing castle like a jigsaw puzzle.The upgrade comes as Hong Kong Disneyland marks its 15th anniversary at a challenging time.”The castle is the heart and soul of any given Disney Park,” Kelly Willis, executive creative director of Walt Disney Imagineering who oversaw the transformation, said at the opening on Friday. “We wanted to transform the image of Hong Kong Disneyland to mark a new era of the resort.””It’s a symbol of courage, hope and possibility,” Willis added.The architecture is inspired by 13 stories of Disney princesses and queens. Each tower is dedicated to their iconic stories through color, patterns and symbolism.”Living in Hong Kong, the city is made up of a rich fabric of diverse cultures from all around the world, and it’s well known for its international character,” Willis said. “The transformed castle is inspired by this notion and its rich diversity.”At the opening, a Disney super fan named Melissa, who told ABC News she visits the park every week when she can, said, “I’m feeling very proud of it because it’s an exclusive design … it’s beautiful. “Amid the pandemic, uncertainty remains over whether Hong Kong’s version of the happiest place on earth will need to temporarily shut its doors to visitors once again. The resort had already been forced to close twice this year due to waves of coronavirus infections. It reopened for a second time in September. It now looks as though Hong Kong is being hit by another surge of cases, with more than 60 cases being reported on Friday. The city had reported close to zero cases for months.

Disney is the parent company of ABC News.Copyright © 2020, ABC Audio. All rights reserved.

‘The Queen’s Gambit’ is a winning one for Netflix
Here’s why fans believe Rihanna will be featured in ‘Black Panther 2’
New York AG sues Catholic Diocese of Buffalo over sexual abuse allegations
New large storm system to develop in Central US with snow from Rockies to Upper Midwest
Teenager charged in connection with Wisconsin mall shooting
Suspect arrested, charged with murder for Sonic Drive-In shooting that killed two, injured two