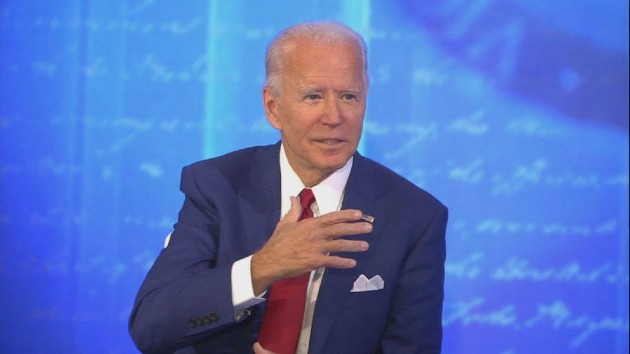 By LIBBY CATHEY, ADIA ROBINSON, LAUREN KING, CATHERINE THORBECKE, LAUREN LANTRY, KIARA BRANTLEY-JONES and BOBBY GEHLEN, ABC News(WASHINGTON) — President Donald Trump is slated to hand over control of the White House to President-elect Joe Biden in 51 days.Here is how the transition is unfolding. All times Eastern.Nov 29, 7:46 pmBiden fractures foot, will require walking boot ‘for several weeks’After initial X-rays were “reassuring,” a follow-up CT scan showed that President-elect Joe Biden has hairline fractures in his foot following a fall this weekend, his doctor said.Biden will likely need to wear a walking boot “for several weeks,” Dr. Kevin O’Connor, the director of executive medicine at GW Medical Faculty Associates, said in a statement.“Initial X-rays did not show any obvious fracture, but his clinical exam warranted more detailed imaging,” O’Connor said in a statement. “Follow-up CT scan confirmed hairline (small) fractures of President-elect Biden’s lateral and intermediate cuneiform bones, which are in the mid-foot.”Biden fell over the weekend while playing with his dog.

Nov 29, 6:49 pmBiden sprains foot, X-rays ‘reassuring’President-elect Joe Biden suffered a sprained foot Saturday after slipping while playing with his dog, according to his doctor.”Initial X-rays are reassuring that there is no obvious fracture and he will be getting an additional CT for more detailed imaging,” Dr. Kevin O’Connor said in a statement Sunday following the examination at the Delaware Imaging Network facility at the Omega Professional Center in Newark.Biden slipped while playing with his dog, Major, and twisted his ankle.

Nov 29, 5:08 pmBiden, Harris announce all-female White House communications staffBiden and Vice President-elect Kamala Harris announced on Sunday seven top members of the White House senior communications staff, all of whom are female.Jen Psaki, who served as communications director during the Obama administration and has been working as a spokeswoman for the transition, will be the White House press secretaryKate Bedingfield, who served as the Biden campaign’s communications director, will assume the same title in the White House.Karine Jean-Pierre, who was a senior advisor to Biden’s campaign, will serve as the principal deputy press secretary.Pili Tobar, who was the Biden campaign’s communications director for coalitions, will be the deputy White House communications director.Other hires announced Sunday include Symone Sanders, a senior campaign adviser, who will be the chief spokeswoman for Harris, Ashley Etienne who will be Harris’ communications director, and Elizabeth Alexander, who will be first lady Jill Biden’s communications director.Nov 29, 4:06 pmBiden twisted ankle while playing with his dogBiden slipped while playing with his dog Major, and twisted his ankle on Saturday. Out of an abundance of caution, he will be examined this afternoon by an orthopedist.Nov 29, 2:43 pmYellen brilliant, experienced and has ‘broad support’: ABC News’ Rebecca JarvisBiden is preparing to roll out the names of people on his economic team and sources have told ABC News that he plans to tap Janet Yellen as his treasury secretary, ABC News White House correspondent Rachel Scott said on This Week Sunday.”If confirmed, she would be the first woman to hold that job, and she would face a monumental task of not only trying to rebuild the nation’s economy but also likely playing a pivotal role in those stalled coronavirus negotiations there on Capitol Hill,” Scott told This Week Co-anchor Martha Raddatz.During the “Powerhouse Roundtable” discussion, Raddatz asked ABC News chief business correspondent Rebecca Jarvis about Yellen: “There were several names that were floated. And what do you think it means?””Well, Martha, she’s brilliant. She’s experienced and has very broad support. The progressives like her but so do Wall Street and corporate America. And she has bipartisan support. She also has a huge task in front of her,” Jarvis said, referring to the ongoing pandemic.”And while President-elect Biden has been calling for more stimulus and additional stimulus plan, that’s something she has also been calling for because of the fact that this recovery that we’re in the midst of is still on extremely fragile footing,” she added.

Nov 29, 12:20 pmWisconsin finishes its partial recountThe Wisconsin partial recount of the state’s most heavily Democratic counties, Dane and Milwaukee Counties, has concluded. Milwaukee finished up on Friday while Dane finished up this morning.Trump received a net gain of 45 votes in Dane County, as Biden lost 91 votes from the original count, while Trump lost 46. The new total from Dane County is 260,094 for Biden and 78,754 for Trump, according to a tweet of the recount paperwork from the Dane County Clerk Scott McDonell.In total, the results changed by 87 votes in Biden’s favor. That’s less than the margin that the results changed in the 2016 recount — which was 130 votes — but about in line, since only two counties were recounted this time.As Trump said himself in a tweet on Saturday, though, the GOP goal here was not to find missing votes in the recount, but to set up lawsuits they’ll launch against votes cast early and votes cast by “indefinitely confined” voters.“The Wisconsin recount is not about finding mistakes in the count, it is about finding people who have voted illegally, and that case will be brought after the recount is over, on Monday or Tuesday. We have found many illegal votes. Stay tuned!,” Trump tweeted yesterday.Nov 29, 12:12 pmSuburban votes key to putting Biden over the top: Nate SilverBefore the election, Trump worried publicly about his prospects among suburban voters following a dramatic swing for Democrats in 2018, said ABC’s This Week Co-anchor Martha Raddatz.While his win might not have been the landslide Biden was hoping for, one pattern the polls predicted did come true, FiveThirtyEight editor in chief Nate Silver said.”He did really well in the suburbs.””Believe it or not, Biden did a tiny bit worse than Hillary Clinton in the city of Philadelphia. He netted about 471,000 votes from it, as compared to 475,000 for her,” Silver said while reviewing voting data in Pennsylvania. “But in the four suburban counties in the Philly metro area, Bucks, Chester, Delaware and Montgomery, Biden improved on Clinton’s performance by a combined 105,000 votes.  That’s enough to account for his entire margin over Trump in the Keystone State.”In Wisconsin, he said he saw a similar pattern for Biden, where a 25,000 vote improvement relative to Clinton was enough to account for his roughly 20,000 vote overall margin of victory there.”I don’t even need to tell you about Georgia. You can just look at the map to see how much the entire Atlanta metro area has turned blue,” he said. “But in the five core counties in the Atlanta metro — Fulton, DeKalb, Gwinnett, Cobb and Clayton — Biden won by more than 700,000 votes, as compared to 470,000 for Hillary.”Nov 29, 11:50 amTrump ‘will represent thunder at the fringe for years to come’Though Trump is signaling he will leave the White House despite publicly fighting on, Washington Post opinion columnist Michele Norris said he will remain an important person in the party.”He’s now saying if the Electoral College approves Joe Biden, that he will leave. But will he ever really leave?” she said on ABC’s This Week Sunday. “I mean, I think it’s safe to assume he’ll represent thunder at the fringe for years to come, that he will be an important person in the party, a greatly influential person in the party.”Nov 29, 10:23 amBiden will have challenge reentering Iran nuclear deal: McRavenRetired Navy Adm. William McRaven said Sunday that he doesn’t think the president-elect can get back into the Iran nuclear deal without some changes.”There’s been a lot of controversy and a lot of folks who don’t like the JCPOA and I understand that,” McRaven said on ABC’s This Week. “But the fact of the matter is the JCPOA, which probably going to give us, you know, 10 to 12 to 15 years before the Iranians could possibly have enriched enough uranium to build bomb.”Complicating matters is Friday’s apparent assassination of one of Iran’s most prominent scientists, Mohsen Fakhrizadeh. While no one has claimed responsibility for the killing, the incident has brought out a full response from Iran’s top officials, including the country’s foreign minister, Mohammad Javad Zarif, who pointed the finger at Israel.”Now, of course, by attacking their nuclear scientist, by really escalating this effort, the Iranians I think are going to be more compelled to try to get a bomb quicker. This is going to complicate President Biden’s efforts, diplomatic efforts,” he told This Week Co-anchor Martha Raddatz on Sunday. “Now, again, from the Iranian standpoint, after President Trump pulled out of the JCPOA, I think they are going to be very, very reluctant to get into any agreements with the United States at this point. So, a President Biden will have a difficult challenge on his hand.”

Nov 29, 9:32 amPa. Supreme Court denies another bid by Trump allies to halt election certificationAnother court ruling has gone against allies of the Trump campaign in their bid to halt certification of the 2020 presidential election in Pennsylvania, as the state’s Supreme Court issued an order Saturday dismissing a recent court challenge focused on mail-in voting.This election challenge was brought by U.S. Rep. Mike Kelly, a Republican, along with another GOP candidate for Congress, alleging that the state legislature had not legally passed the measure allowing for universal mail-in voting.The plaintiffs called on the court to have Pennsylvania Secretary of State Kathy Boockvar cancel all mail-in ballots or, if not, to empower the state legislature to appoint new electors. A trial judge on Tuesday had imposed a temporary injunction to pause the election certification process until the question could be resolved. Boockvar’s office brought the matter immediately to the state Supreme Court.The Pennsylvania Supreme Court vacated the injunction on Saturday and dismissed the case with prejudice, meaning the GOP cannot bring it back.Copyright © 2020, ABC Audio. All rights reserved.