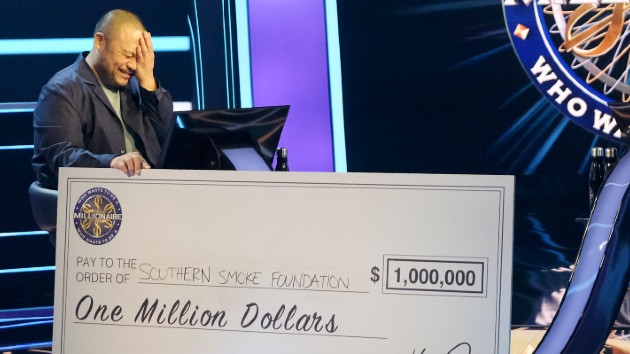 (LOS ANGELES) — Celebrity chef, restaurateur, and Ugly Delicious host David Chang snagged the top prize on Who Wants to be a Millionaire? on ABC Sunday night — but it’s restaurant workers who will benefit.

Chang’s jackpot will be donated to the Southern Smoke Foundation, which is dedicated to helping restaurant workers in need — and thanks to the pandemic shutdowns, that’s no small number.

On the million-dollar question, Chang called upon ESPN personality Mina Kimes for help; she correctly advised him how to answer this: “Which U.S. president was the first to have electricity in the White House?” “No celebrity in the 20 years that this show has been on has ever won the million dollars,” host Jimmy Kimmel warned before Chang pulled the trigger with the right answer Kimes gave: Benjamin Harrison.

In response, the charity tweeted its gratitude to Kimes and Chang, noting, “This is going to change so many peoples’ lives for the better!” along with the hashtag, “#takingcareofourown.”