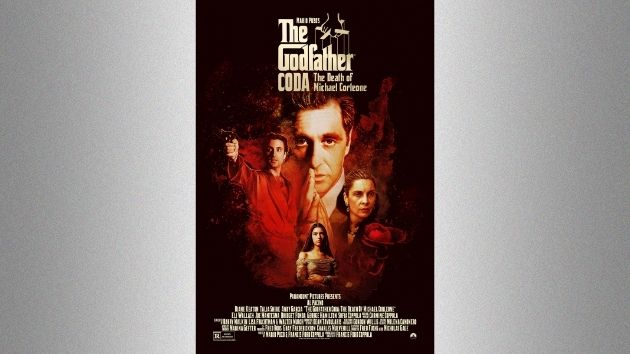 (LOS ANGELES) — With The Godfather Part III marking its 30th anniversary, The Godfather director Francis Ford Coppola and Paramount Pictures revisited the saga’s last chapter with a new edit of the film. Now titled The Godfather Coda: The Death Of Michael Corleone – it includes a re-worked ending and beginning, along with re-edits and restoration that the director hopes will put things in a different perspective.

Talia Shire, who plays Connie Corleone in the films (and is Coppola’s sister,) explains why it was important for her brother to complete the project.

“I think he felt extremely rushed with the editing of the third piece,” she tells ABC Audio. “I used to tell [my children] if you look at the Sistine Chapel ceiling, the fingers between God and man, have a space. I think Francis went back to look for that space. That’s the artfulness that is Francis. He wanted that aesthetic.”

Looking back, the film’s original release wasn’t exactly a critical hit and much of criticism panned Coppola’s real-life daughter Sophia’s performance in the movie. However, Shire says it was Sophia’s presence that tied things together on an already difficult shoot.

“I mean she was a kid and very pure and as we see now, as a mature wonderful artist, always with her own aesthetic, I think she focused Francis. And we moved forward,” she explains. “But yeah there was a lot of unkindness… It was a kind of cruelty.”

“I think you can go back a million times and it’s strangely alive, just like a great painting,” she says.

The Godfather Coda: The Death Of Michael Corleone debuts in select theaters Friday and arrives on Blu-Ray & Digital Tuesday, December 8.