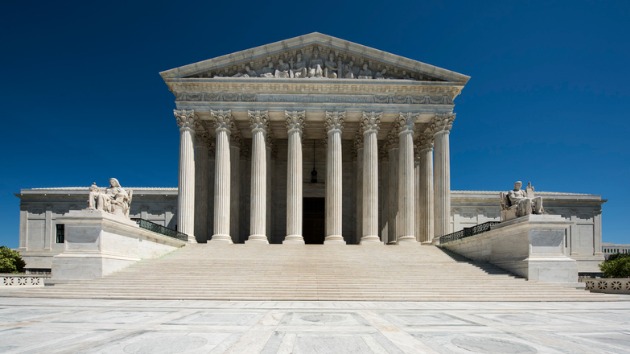 By MATTHEW MOSK, OLIVIA RUBIN, ALEX HOSENBALL, and DEVIN DWYER, ABC News(WASHINGTON) — In a single, succinct order, the U.S. Supreme Court late Tuesday rejected one of two 11th-hour attempts by allies of President Trump to reverse the outcome of the 2020 election.”The application for injunctive relief presented to Justice Alito and by him referred to the Court is denied,” the court said.There were no noted dissents or a breakdown of how justices voted.The bid by a pro-Trump Pennsylvania congressman to invalidate the state’s 2.5 million mail-in ballots that heavily favored Democrat Joe Biden was one of two long-shot bids to get President Donald Trump’s election challenge in front of the U.S. Supreme Court.A second case, filed by the Texas Attorney General, alleges that four battleground states “exploited the COVID-19 pandemic” to improperly loosen election rules and skew the contest’s outcome.This latest lawsuit, targeting Pennsylvania, Michigan, Wisconsin and Georgia, arrived at the doorstep of the U.S. Supreme Court Tuesday morning, just as election officials from Pennsylvania filed briefs for Justice Samuel Alito’s consideration in the other matter.”These continued attacks on our fair and free election system are beyond meritless, beyond reckless — they are a scheme by the President of the United States and some in the Republican party to disregard the will of the people — and name their own victors,” Pennsylvania Attorney General Josh Shapiro, a Democrat, said in a statement after learning of the Texas case. “This isn’t a pick your own ending novel — this is a Democracy.”The two actions came on the Dec. 8 “safe harbor” deadline by which states must lock in the slate of electors they intend to send to Congress to affirm the election results — selections that are intended to match the will of the voters.The Supreme Court has yet to reveal whether it will consider arguments in the Texas case. Both cases were elements of the apparent legal endgame in a month-long bid by President Trump and his allies to invalidate the results of an election he lost by more than 6 million votes.Since that defeat, the president and his allies have mounted more than four dozen lawsuits in state and federal courts that have met with resounding and, at times, scathing defeats. Most of the cases have relied on unsubstantiated or debunked claims of fraud or misconduct — allegations that have been repeated at hearings and on social media, but have not withstood judicial scrutiny.Trump has pointedly said publicly that he is eager to see his legal challenges to the election reach the nation’s high court, insinuating at times that he believes he will find a friendly audience there.”Well, the problem is, it’s hard to get into the Supreme Court,” Trump said on Fox News recently. “I’ve got the best Supreme Court advocates, lawyers, that want to argue the case, if it gets there. They said, ‘It’s very hard to get a case up there."”The Texas case opens a new front in that effort, bypassing the court system by bringing the argument directly to the Supreme Court. The crux of the argument by Texas Attorney General Ken Paxton is that the four battleground states failed in their duty to conduct fair elections by distributing absentee ballot applications and ballots and then “ignoring statutory requirements as to how they were received, evaluated and counted.””Their failure to abide by the rule of law casts a dark shadow of doubt over the outcome of the entire election,” Paxton said in announcing the legal action. “We now ask that the Supreme Court step in to correct this egregious error.”The Texas bid appears to have the tacit support of the White House, with President Trump tweeting last night ahead of the filing that these key swing states had overstepped their authority and “were ignorant of the limitations imposed by the Constitution.”But even Republican officials in the states being sued said they did not see any path for the case.”With all due respect, the Texas Attorney General is constitutionally, legally and factually wrong about Georgia,” said Katie Byrd, a spokesperson for Georgia Attorney General Chris Carr.The case rejected by the Supreme Court Tuesday involved an appeal brought by U.S. Rep. Mike Kelly, a Pennsylvania Republican, along with another GOP candidate for Congress, to a lawsuit the two Trump supporters brought challenging mail-in voting.Kelly alleges that the state legislature did not legally pass the law allowing for expanded mail-in voting during the pandemic. The suit asks the justices to order all mail-in ballots thrown out, along with the state’s official certification of election results, which was signed by Gov. Tom Wolf last week.The bid already suffered a resounding loss in the Pennsylvania Supreme Court, in large part because the justices there said Kelly sat on his concerns for a year, and only mounted his legal challenge when the outcome of the election went against the president.Pennsylvania election officials cited that argument in responding to the bid by Kelly to appeal that ruling to the highest court in the land. But they also offered a more broad objection to the request that the justices get involved in the election at this late stage.Doing so, they argued, “would sow chaos and confusion across the Nation while inflaming baseless concerns about electoral impropriety and ensnaring the Judiciary in partisan strife.””This case reaches the Court against the backdrop of unfounded claims — which have been repeatedly rejected by state and federal courts — that wrongly impugn the integrity of the democratic process and aim to cast doubt on the legitimacy of its outcome,” the filing on behalf of Pennsylvania Secretary of State Kathy Boockvar says. “Given that context, the Court should not plunge itself into a firestorm by issuing the first ever judicial order decertifying the results of a presidential election.”ABC News’ John Santucci contributed to this report.Copyright © 2020, ABC Audio. All rights reserved.

Can election deniers win big in the midterms?