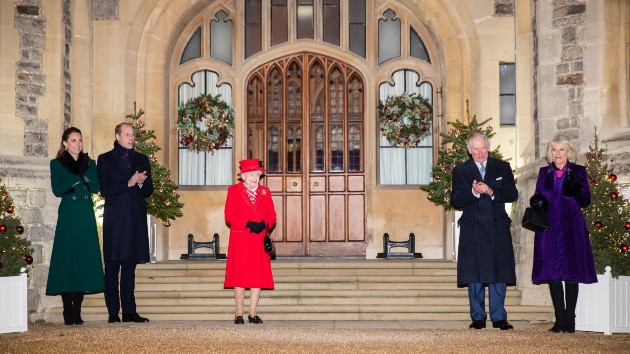 By KATIE KINDELAN, ABC News (LONDON) — Members of Britain’s royal family, including Queen Elizabeth, Prince Charles and Prince William, appeared together in public Tuesday for the first time since the start of the coronavirus pandemic earlier this year.The royals gathered at Windsor Castle to thank local volunteers and key workers who have helped throughout the pandemic and are now stepping up to serve during the Christmas holiday season.In addition to the queen, Charles and William, the heirs to the throne, other royals who stepped out to offer their thanks included Charles’ wife, Duchess Camilla, William’s wife, Duchess Kate, Princess Anne and Prince Edward and Sophie, the Earl and Countess of Wessex.The last time the extended royal family was together was in early March when they attended the Commonwealth Day service at Westminster Abbey.The service, which also marked Prince Harry and Meghan’s final engagement as working members of the royal family, took place just before stay-at-home orders were put in place in the United Kingdom.The royals have been apart from each other throughout most of the pandemic, relying on technology to stay in touch, like so many families around the world.The royal family will also be making a departure this Christmas from their decades-long tradition of celebrating the holiday at Sandringham, Queen Elizabeth’s estate in Norfolk. Instead, Queen Elizabeth and Prince Philip plan to spend the holiday at Windsor Castle, where the royals gathered on Tuesday.In addition to meeting with local volunteers, the royals also heard Christmas carols performed by The Salvation Army Band.The reunion with family members at Windsor Castle Tuesday coincided for William and Kate with the last stop of their three-day train tour of England, Scotland and Wales.The Cambridges traveled on the Royal Train to meet with and thank front-line workers and volunteers who have been helping during the coronavirus pandemic.The tour marked the first time that Prince William and Kate traveled aboard the Royal Train for royal engagements, which is usually reserved for Queen Elizabeth and Prince Philip. Queen Victoria was the first reigning British sovereign to use the Royal Train in June 1842. Copyright © 2020, ABC Audio. All rights reserved.