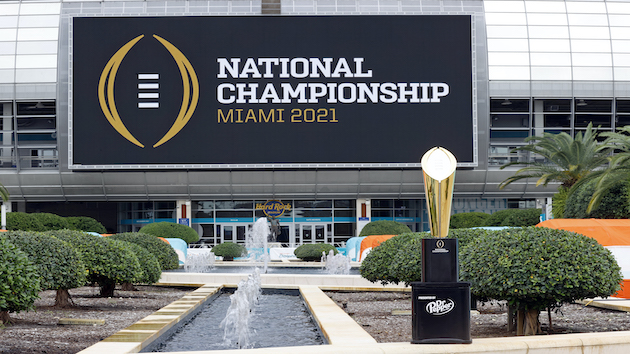 (NEW YORK) — The College Football Playoff participants have been announced.

Top ranked Alabama will face fourth ranked Notre Dame in Arlington, Texas  at 5:00 p.m. ET on January 1. The game was supposed to be played at the Rose Bowl in Los Angeles, but was moved because of the growing number of COVID-19 cases in southern California, according to the Rose Bowl.

Both games will be on ESPN.

Alabama, Clemson and Ohio State all won their conference championship on Saturday.

Notre Dame lost to Clemson in the ACC championship.

This is the sixth appearance for both Alabama and Clemson. Both team have won the title twice.

This will be the Buckeyes third appearance. They won the first ever title game in 2014.

The Fighting Irish make its second appearance in the playoff. They lost the 2018 Cotton Bowl to Clemson in their first appearance.

The College Football Playoff Championship will be played on January 11 at in Miami.