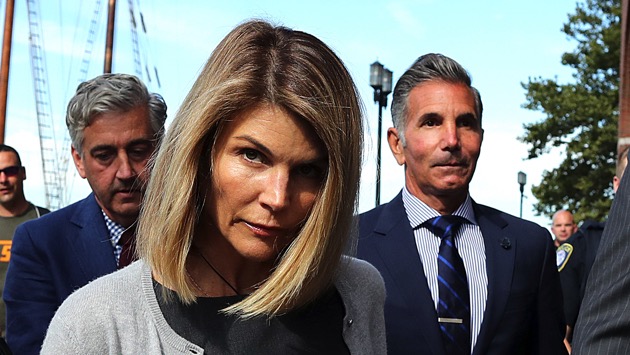 By LESLEY MESSER and KATE HODGSON, ABC News(NEW YORK) — Lori Loughlin has been released from prison after serving nearly two months for her role in the so-called “Varsity Blues” college admissions scandal.The actress, who surrendered to authorities at the Federal Correctional Institution in Dublin, California, on Oct. 30, left the prison on Monday morning.Loughlin, 56, and her husband, 57-year-old fashion designer Mossimo Giannulli, pleaded guilty earlier this year to conspiracy charges after they were accused of paying $500,000 to get their two daughters into the University of Southern California as crew recruits. However, neither Isabella Rose Giannulli, now 22, nor Olivia Jade Giannulli, now 21, had ever rowed competitively.Giannulli began serving his five-month sentence at the Federal Correctional Institution, Lompoc, in Southern California on Nov. 19. He’s scheduled for release in April.Federal prosecutors in Boston, who charged the couple, declined to comment.Olivia Jade Giannulli told “Red Table Talk” hosts Jada Pinkett Smith, Willow Smith and Adrienne Banfield-Norris earlier this month that although her parents were trying to give their children opportunities that evaded them, they now recognize the enormity of their mistakes. Noting that she believed she was working with a legitimate college counselor at the time, she added, “I don’t deserve pity. We messed up.””I took my privilege and all my blessings for granted and I never thought anything of it,” Olivia Jade Giannulli said. “That’s what really rocked me. I was like, ‘This is wrong. You need to talk about this. You need to do it publicly because the situation was public, and then you need to move forward and do better."”Loughlin and Mossimo Giannulli weren’t the only two celebrities to be implicated in the scandal. Actress Felicity Huffman served 11 days in prison last year for her involvement.Copyright © 2020, ABC Audio. All rights reserved.