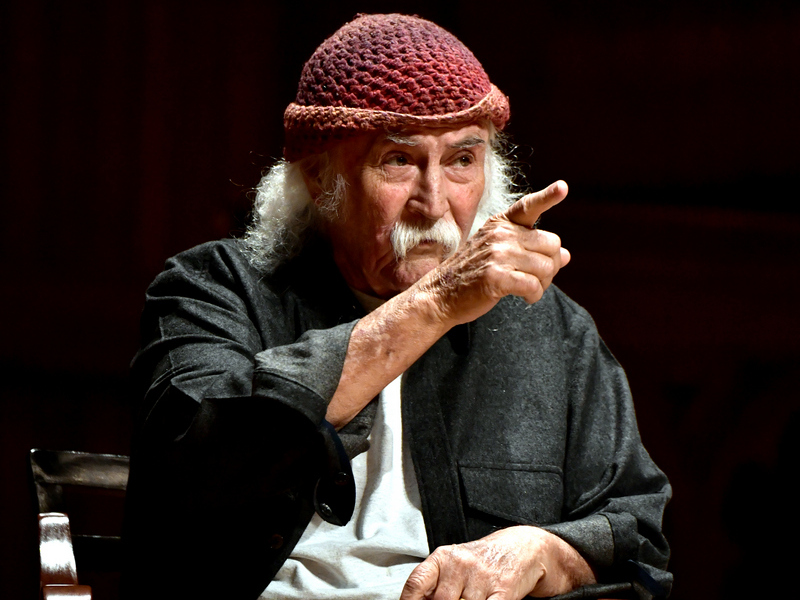 David Crosby isn't sure if he'll ever tour again. The 1960's icon turns 80 next month and releases his latest solo album, For Free, on July 23rd. The album — named after "Croz's" cover of the Joni Mitchell classic — features a new cover portrait by Joan Baez, and contributions from his son and bandmate James Raymond, Steely Dan's Donald Fagen, and the Doobie Brothers' Michael McDonald.

During a new chat with Rolling Stone, Crosby, who like all of the business, was forced to put all his live dates on ice, was asked about returning to the road, explaining, "I keep going back and forth on that. I can’t do a bus tour anymore since I can’t sleep on them anymore; I’m just too old. Also, my guitar playing is a real problem. I can still do it, but I’m down 20 percent from where I was at my best, and it’s deteriorating pretty steadily. If I play again, I’d have to bring another guitar player into the band."

Crosby, whose legendary battles with addiction are the stuff of legend, admitted he's taking nothing for granted these days: "I'm f***in' lucky.  don’t know if I have two weeks left of life or 10 years, but it doesn’t matter. What matters is what you do with the time. If you sit there on your butt and worry about dying, then you f***ing wasted it. I haven’t been wasting it. I’m having a really good time, and feeling wonderfully about it. Sooner or later, something is going to break. Right now, my life is pretty great."

Not too long ago, David Crosby told us that as he winds down his creative life, when any new work could feasibly be one's final statement, "finishing strong" takes on a whole new meaning: ["Y'know, at this stage of the game in many artists lives, y'know, they're just kinda like pullin' the handle to see if they can get the same numbers to pop up. And, y'know, I think (Bob) Dylan was right that 'he not busy being born was busy dying.' I think that's key, sort of almost Buddhist, central stuff. Y'know, when you almost die, you come back and you don't want to do what you were just doing. You want to, in some fashion, be more alive. And Neil (Young) tagged it best, he called me up, and he said, '(imitates Young) 'Croz' I said, 'Neil.' He said, 'Croz — forward motion, man. Leave a wake, Croz.' (Laughs) 'Cause he knows I'm a sailor and if you leave a wake, you're moving forward. And that's, that's basically the deal."] SOUNDCUE (:47 OC: . . .  basically the deal)