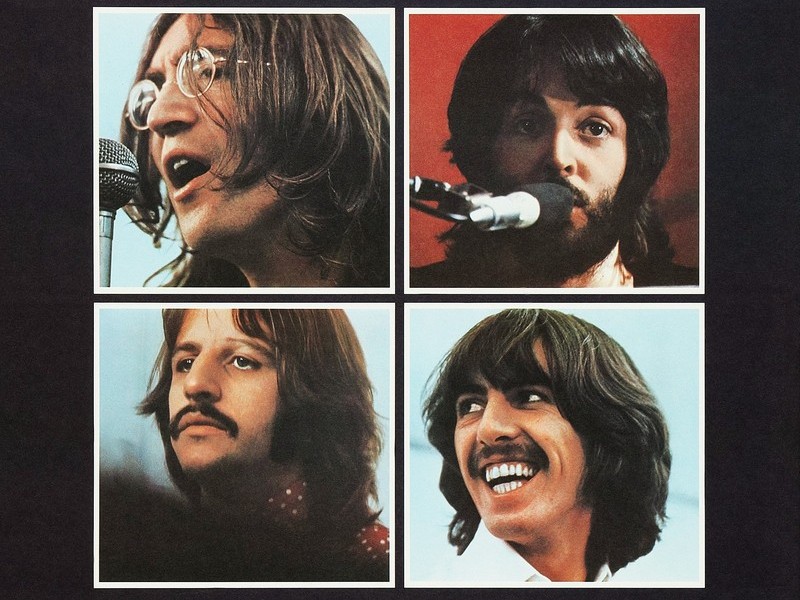 Out today (October 15th) is the long-awaited "Super Deluxe" version of the Beatles' Let It Be. The set features six discs — a remastered version of the album, outtakes, a Blu-ray mix of Let It Be, and engineer Glyn Johns' original 1969 mix of the scrapped original album titled Get Back.

The Let It Be album has been newly mixed by producer Giles Martin and engineer Sam Okell in stereo, 5.1 surround DTS, and Dolby Atmos. The "Super Deluxe" collections also feature 27 previously unreleased session recordings, a four-track Let It Be EP, and the never before released 14-track Get Back stereo LP mix compiled by engineer Glyn Johns in May 1969.

Although Let It Be, which was released in May 1970, was technically their final album, Abbey Road was actually the Beatles' last recorded work. The Let It Be project — which began 16-months before its release — was issued nearly a month after Paul McCartney announced that the "Fab Four" had indeed split.

The album served as the soundtrack to the film of the same name, which premiered in New York City on May 13th, 1970. The movie, which was shot in January 1969, was originally intended to be a TV special called Get Back featuring the group rehearsing for their first live show in over two years.

Let It Be marked the only Beatles album to house three Number One songs — albeit in different mixes to their single counterparts: "Get Back," "Let It Be," and the group's final chart-topper, "The Long And Winding Road."

The Let It Be album hit Number One on June 13th, 1970, ending Paul McCartney's three-week run on top of the charts with his solo debut, McCartney. Let It Be went on to hold the top spot for a solid month until the soundtrack to Woodstock displaced it.

Producer Giles Martn — son of the famed-late Beatles producer George Martin — explained that Let It Be is unique among all the other Beatles albums and one that's always seemed to have several hands stirring the pot: ["To fit in with the program we've done so far with Sgt. Pepper's, and the 'White Album,' and Abbey Road, it made sense to work on the album. But, of course, Let It Be's a bit more contentious than the others. It's a Beatles album made out of bunch of ideas, and so, Paul (McCartney) — famously — wasn't happy with Phil Spector's production work, and I met him at Abbey Road, and I said, 'Listen, it doesn't make sense to change history. I know we did Let It Be. . . Naked. And he said, 'Yeah, I agree. I agree. Can you just take the harp down on 'The Long And Winding Road,' I don't like it very much."] SOUNDCUE (:24 OC: . . . it very much)

Giles Martin went on to say that history has left an unwarranted cloud over the entire Let It Be project: ["I think the legend is warped, funnily enough. (Laughs) I think the Beatles told the wrong story themselves. 'Sounds an insulting thing to say, but you have to remember that Let It Be came out when the Beatles were at their worst breakup scenario and they were suing each other. However, the album wasn't made at that time. I mean, they were aware of their impending divorce, if you like, because they were going their separate ways — and they talk about it in the film. Let It Be's a bit like a marriage, which is becoming a bit tired and they're trying to go back to their date nights by playing live again. That's what Let It Be is, in a way. It doesn't quite work for them. It's too ambitious, what they're trying to do."] SOUNDCUE (:36 OC: . . .  trying to do)

In the end, Martin told us that Let It Be is not the doomed swansong history has portrayed it to be — but actually a significant and positive experience all around: ["What we see is, actually, it's an incredible document of how the Beatles work together. That's what it is. It's not a document of how the Beatles broke up, because they didn't break up. They went off and they played the rooftop concert and then did Abbey Road."] SOUNDCUE (:10 OC: . . . did Abbey Road)

Giles Martin On ‘Let It Be’ Not Showing The Beatles’ Demise :

Giles Martin On The Legend Of ‘Let It Be’ :

Giles Martin On Approaching ‘Let It Be’ :