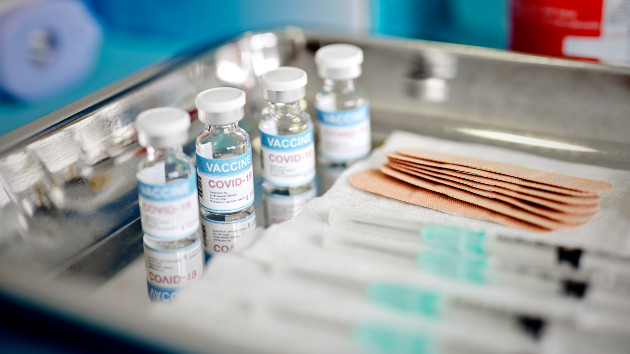 (NEW YORK) — Federal regulators are expected to decide on a new COVID-19 vaccine design in early July, which would allow vaccine companies to begin production for rollout this fall and winter, a top official told ABC News.

Food and Drug Administration vaccine chief Dr. Peter Marks said the decision would likely come from the FDA shortly after its advisory committee meets on June 28 to review data from the vaccine companies about the versions of next-generation vaccines they’re testing.

The FDA will then make a decision on which type of vaccine the companies should go ahead with, an estimation they’ll base on what could offer the best protection even in the face of new variants this fall and winter, similar to how the flu vaccine is concocted ahead of flu season.

“We’ll have to make some decision by early July to make sure that the manufacturers know what we’re looking to do, so that they know what they have to start producing in large quantities,” Marks, who serves as director of the department that oversees vaccines within the FDA, told ABC News in an interview.

Under consideration is how to give people “the longest duration of a high level of protection” with their vaccines, not just because it’s unrealistic to keep boosting every few months, but also because experts predict another surge in the colder months.

Already at play, however, is the current surge. Cases are rising and nearly a third of the country is currently at medium- or high-risk community COVID levels, according to the Centers for Disease Control and Prevention.

That’s why, in the meantime, the FDA is also internally discussing whether to open up second boosters to a wider age-range to mitigate rising cases, Marks said. They’re currently only available for people over 50, or people over 12 who are immunocompromised.

The FDA would have to come to a decision in the next few weeks to intervene effectively, as cases are already on the rise, Marks said.

“I can tell you that that discussion is already happening internally — it’s just that I can’t tell you what the outcome will be at this point,” he said.

For example, hospitalization rates for people under 50 who have received their first booster are still relatively low, Marks said, indicating boosters might not be necessary for younger people. But the FDA is also looking into the risks from even mild infections, like long COVID, and whether booster shots would mitigate that.

Opening up second boosters to more people would just be a stop gap measure, though. The vaccines for the fall are intended to offer a more lengthy, durable protection.

“We’d be looking at things like at least 10% higher in terms of immune response, if not more, against the currently circulating virus,” Marks said, laying out the criteria the FDA is looking for in the future vaccines.

The vaccines would have to be superior, at least against the current variants like omicron and its subvariants, to make it worthwhile to switch over from the vaccines in use now.

Who would get a new vaccine?

Though it could change when the advisory committees meet, Marks said he expects the next-generation boosters to be available for all age groups.

As far as timing, all ages should become eligible around the same time, Marks said, unlike the lengthy waiting periods of months between older and younger age groups with the current vaccines.

And the FDA also hopes to get both vaccine companies, Pfizer and Moderna, to produce vaccines that target the same strains.

“People are very confused about everything, to have different compositions for different vaccines will get things even more confusing,” Marks said.

Just 43% of those 65 and older have gotten a vaccine dose in the last six months, be it a first or second booster, according to the CDC, even though nearly 90% of people in that age group got their initial vaccination series.

“From a public health standpoint, what we’ve seen is if it only lasts three or four months, it may be that there’s a recommendation that you get another one, but the vast majority of people are not going to keep coming in and getting more boosters,” said Dr. Robert Wachter, chair of the department of medicine at the University of California, San Francisco.

“With each one, we lose some more people,” Wachter said.

Come fall, that fatigue could be exacerbated by calls for yet another booster.

If the vaccine is more effective, though, that could help to convince people it’s worth another round.

Experts are wary that the vaccine this fall will last a full year, but expect it will at least be more effective in its protection because it will be updated with more of the recent variants, whereas the current vaccine is based on the first strain of COVID from 2019.

“By the end of all that, for the fall, we’re going to know which of these vaccine combinations gives us the highest antibody response towards the most new and improved variants,” Goepfert said.

He expects the new vaccine will better protect against severe disease, but cautions that stopping all infections is a lofty goal.

“I am hopeful that maybe we could have a yearly vaccine rather than this every few months go back to get the vaccine boost,” Goepfert said, but that’s probably “one or two more tries” away.

Of course, the overarching issue of resources still remains. Who will pay for these new vaccines, or the ones after them?

Congress has yet to strike a deal with the White House for more COVID funding, even as other countries move ahead with negotiations with the vaccine companies.

White House COVID response coordinator Dr. Ashish Jha warned on Wednesday that if Congress doesn’t agree to billions in new COVID funding, not every American who wants a vaccine this fall will be able to get one.

Should the FDA decide that not everyone needs a vaccine — that only people over 50, or over 65, need another booster shot — that wouldn’t be an issue. But Marks said he’s hopeful that if “the right thing to do medically” is to recommend them to everyone, of all ages, the country will be able to purchase those doses.

“I’m not worried about who’s paying for what. I’m worried about making sure that our recommendations that come out of FDA are the right thing by the people of this country in terms of their health,” Marks said.

“So we will make a recommendation that, based on all of the available evidence, comports with what we see would do the best by public health in the coming year,” he added.

Pediatric COVID-19 cases rising for 1st time since May

July 4th fireworks can be stressful for dogs. These 6 tips can keep them calm and safe