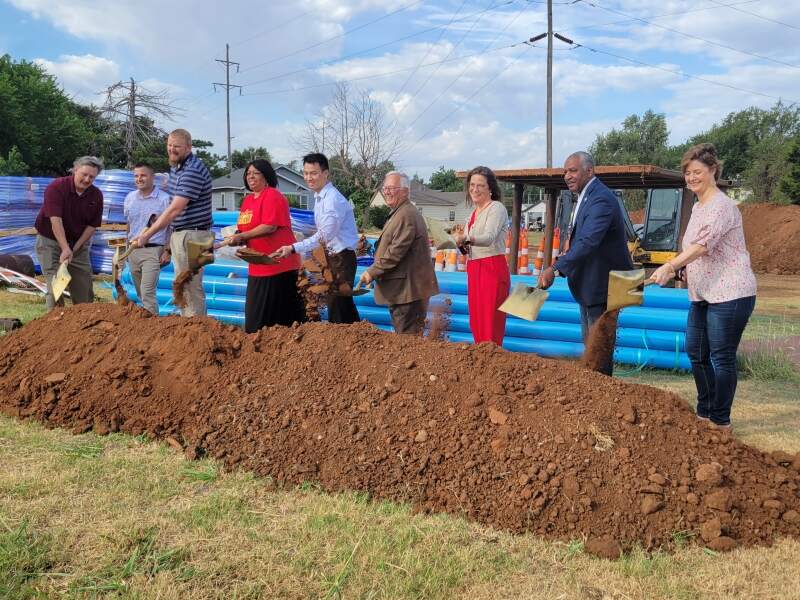 Earlier today at 9:00 am this morning the city of Enid held a ground-breaking ceremony for the Leona Mitchell BLVD waterline improvements. The ceremony was held at Grayson Baptist Church, and Enid Mayor George Pankonin gave a brief speech at the ceremony.

During the ceremony, Mayor Pankonin spoke about when the waterlines in the Southern Heights area were built saying “that was 100 years ago how much wear naturally occurs to a heavily used system in a century?”.

Marketing and outreach manager for the Oklahoma Water Resources Board Tanya White spoke about the type of loan the city of Enid secured to pay for the pipeline saying “what you are looking at is an estimated savings of approximately 1.1 million dollars”.

This is because the project was funded through the drinking water state revolving fund which allowed Enid to secure a loan for the project that was 25% forgivable. But the residents who will be most affected by the project are the residents of the Southern Heights area.

Due to the age of the waterlines in that area residents have had to sometimes deal with brown water and low water pressure. Despite the groundbreaking being today some improvements have already been made in the area and residents have noticed the difference.

“One resident even excitedly exclaimed that “I actually now have water in any room that I turn a faucet on”. Other residents are hopeful they will see similar improvements to their water soon.

First Recipients of the Work in Enid Award Selected

Enid Mayor and Board of Commissioners Study Session, and Meeting Preview