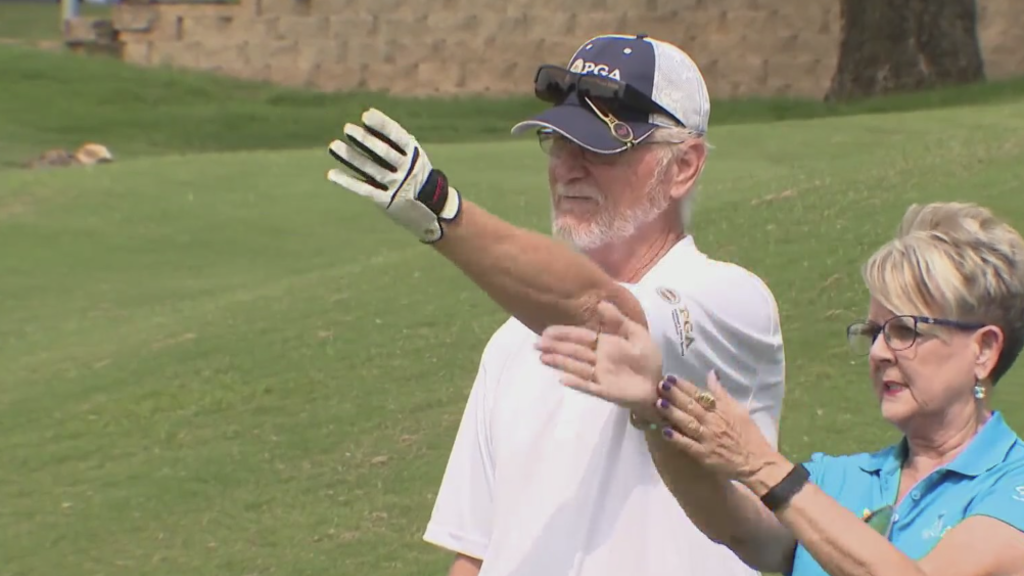 GRAPEVINE, Texas (CBSDFW.COM) — As a voice in the background says, “I’m gonna leave you right there. You’re good,” you would think James Patterson is merely taking a lesson at the Grapevine Golf Course.

Playing golf since the age of five, Patterson says he was raised with a golf club in his hand.

“I missed it so much,” he said. “I [was] just determined to start playing again.”

James is legally blind and through the support of his wife Carissa, he is back to playing three to four times a week.

“You have to decide—are you going to live your life to your disability, or are you going to try to get out and do what you love…with some assistance? That’s what we do,” she said.

A former Fort Hood sergeant, Patterson was in his mid 30s when he was diagnosed with a condition that would cause him to gradually lose his central vision. Over time, he was unable to work and unable to drive, but it didn’t stop him from meeting the love of his life.

“He couldn’t drive at night because of his eyes,” Carissa recalled. “And he said, ‘I understand if you don’t want to go out. I get it.’ And I said, ‘What time do you want me to pick you up?"”

Patterson has a special magnifying glass to look at an app thats tells him how far he is from the hole. Veterans Affairs (VA) has also supplied him with a device known as Iris Vision—which aids him to the point where he can actually make out a menu at a restaurant or be court side at a game.

However, Patterson can’t wear Iris Vision while he plays, as it will fly off his head when he swings the club.

That’s where Carissa comes in.

“It’s totally unselfish,” Patterson said. “She does it for me…period.”

At times, frustration is inevitable. Patterson admits he has thoughts of, “Why me?”

“I think everybody with a disability says that,” he said. “But, you have to put that in the corner of your mind and say, ‘It is me. So, let’s live the best I can."”

As golfer and caddy, the duo finished second last year at the American Blind Golf Championship in San Antonio.

If not for her husband, Carissa says she would have never stepped foot on a golf course.

“I don’t want to be the reason he doesn’t do well. It’s a team effort and I have to hold up my part of the deal,” she said.

But golf is merely the backdrop in the Pattersons’ mission to make others realize that no obstacle is too great to overcome.

“Keep going,” Patterson said. “Don’t let physical things hold you back. There’s always something you can do.”