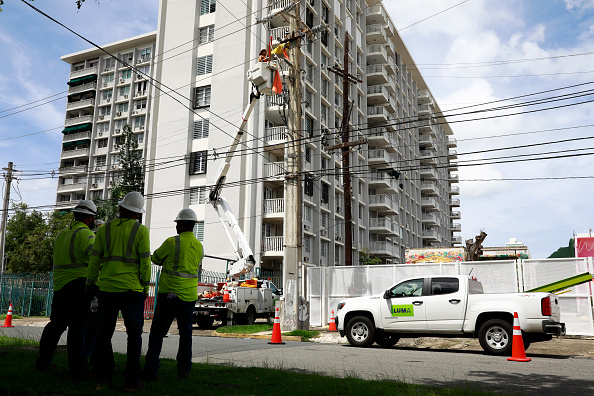 (SAN JUAN, PUERTO RICO) — Hurricane Fiona, which has become a Category 4 storm as it heads toward Bermuda, left in its wake large-scale devastation in Puerto Rico.

The storm reportedly left at least one person dead, caused catastrophic flooding and knocked out power across the island.

The blackout reminded many of the destruction wrought five years ago by Hurricane Maria, which caused roughly 2,975 deaths and demolished much of the island’s infrastructure.

Over a million customers in Puerto Rico have experienced intermittent power outages since Hurricane Maria, with many losing electricity this time even before Fiona made landfall. As of Tuesday morning, electricity had not been restored for an estimated 1.18 million customers.

Things were expected to change after Hurricane Maria. Billions of dollars in federal support were set aside to repair the island’s energy system but the problems persist.

“Outages have been occurring for one reason or another,” Tom Sanzillo, the director of financial analysis for think tank the Institute of Energy and Economics and Financial Analysis, told ABC News. “It’s beyond belief how bad the system is.”

Here’s what you need to know about Puerto Rico’s power grid and why it remains fragile:

Didn’t a power outage happen five years ago with Hurricane Maria?
Yes, it did. When Hurricane Maria made landfall on Puerto Rico, in September 2017, the storm devastated the island’s electricity grid. It took 328 days, or roughly 11 months, for the island to restore power to all of the customers who lost it during the hurricane, which marked the longest blackout in U.S. history.

The electricity infrastructure had shown signs of fragility even before Maria, said Sanzillo. As the economy in Puerto Rico weakened in the 2000s, the maintenance budget shrank and what has been deemed mismanagement exacerbated the shortfall, he added.

“The system is old and it’s undermaintained,” Sanzillo said. “Maria brought it to light.”

The hurricane’s impact prompted sharp scrutiny of the public utility in charge of the power grid — the Puerto Rico Electric Power Authority (PREPA). Months before Maria, PREPA had declared bankruptcy, citing a $9 billion debt load. PREPA had issued bonds to finance the energy grid, but could not pay them back.

What was done to fix the electric grid after Hurricane Maria?
The years following Hurricane Maria brought a mix of public and private efforts to improve the country’s electrical infrastructure.

Three years after Hurricane Maria, in September 2020, the Trump administration announced nearly $9.6 billion in federal funding for the repair of the island’s power system. The sum made up more than half of the support that PREPA would need to modernize its electric grid over the ensuing 10 years, bond credit rating service Moody’s said at the time of the announcement.

Billions in additional funds from FEMA brought the total support allocated for rebuilding the power grid to roughly $12.8 billion, FEMA said in June.

But FEMA has only spent a fraction of the overall money, and an especially small amount of the funds dedicated to “permanent works,” or projects that aim to replace or restore a damaged facility for long-term use.

FEMA has spent $1.6 billion in emergency categories and $7.1 million for permanent works, Manuel A. Laboy Rivera, the executive director of Puerto Rico’s Central Office for Recovery, Reconstruction and Resiliency said in a press release in June.

In other words, as of June, the amount spent by FEMA on projects to permanently restore the power grid makes up 0.05% of the overall funds made available by the federal government.

The delay owes primarily to disagreement between FEMA and the government of Puerto Rico over the implementation of the funds, said Sergio Marxuach, policy director at the Center for a New Economy, a Puerto Rico-based nonpartisan think tank.

“This is a huge, gigantic megaproject and the scope of work for each component has been argued over with FEMA,” he told ABC News.

A report released last week by the U.S. Government Accountability Office, a nonpartisan oversight agency, cited as a key impediment the conflict between FEMA and Puerto Rican government entities over the scope of projects. In addition, officials from the government of Puerto Rico said the island has struggled to obtain the materials needed to commence projects, causing delays of as long as 24 months, the report said.

Another reason for the slow progress centers on a system of reimbursement tied to the funds, which requires local officials to put forward the money for approved projects and later receive reimbursement from FEMA, said Cecilio Ortiz-García, a professor of public affairs at the University of Texas Rio Grande Valley who studies Puerto Rico.

“The municipalities are broke,” Ortiz-García told ABC News. “So that right there is basically a black hole.”

The poorly maintained energy grid poses LUNA with a difficult task, but even so the company has performed “below expectations,” Marxuach said. He cited the ongoing power outages that preceded Fiona and the slow repairs that followed them. “LUMA probably underestimated the scope of what they were undertaking,” he said.

PREPA and LUMA Energy did not immediately respond to ABC News’ requests for comment.

LUMA said in a press release this week that its crews have been “assessing damage, performing critical repairs and working with PREPA and private generators” to reenergize the grid in the wake of Hurricane Fiona.

“We want our customers to know that LUMA has been and will continue to work around the clock to restore power to Puerto Rico following the island-wide outage that began early Sunday afternoon,” Abner Gómez, the company’s public safety manager, said Monday.

Sanzillo said a “fundamental reason” for the intermittent power outages since Hurricane Maria stems from the electric grid’s reliance on imported fossil fuels, noting that heightened energy costs amid the pandemic and the Russia-Ukraine war have exacerbated a budget crunch as the rates paid by customers fail to offset higher costs. Meanwhile, the grid struggles to address facility deterioration tied to longstanding neglect, he added.

Renewables power 3% of the island’s total electricity, according to data from the U.S. Energy Information Administration based on the fiscal year 2021.

“The system is in a state of disrepair,” Sanzillo said. “We’re at the same place we were five years ago.”

What happens next?
Most immediately, Puerto Rico needs to get its power restored. Gov. Pedro Pierluisi declined to say how long it would take to fully restore the grid, but he said for most customers it would be “a question of days,” the Associated Press reported on Tuesday.

In the long term, additional federal funds are set to make their way into energy infrastructure projects on the island.

Annie Brink, an associate administrator at FEMA, said last week that the agency had made $9.5 billion available for a massive infrastructure project to fix Puerto Rico’s energy grid. She vowed that the project would “build it back better.”

Many advocates, including Sanzillo, have called for further investment in renewable energy, both as a means of relieving financial woes for the energy system and bolstering resilience in the event of another major storm.

The island’s government appears to share that goal. The Puerto Rico Energy Public Policy Act, signed into law in 2019 by then Gov. Ricardo A. Rosselló, sets a goal for the island to obtain 40% of its energy from renewables by 2025.

“We should use money from the government to maximize investment in renewable energy,” Sanzillo said. “If they did those things they’d be very far down the way of having a grid that works.”

Ortiz-García said the prospect of future storms adds urgency to the task faced by Puerto Rico.