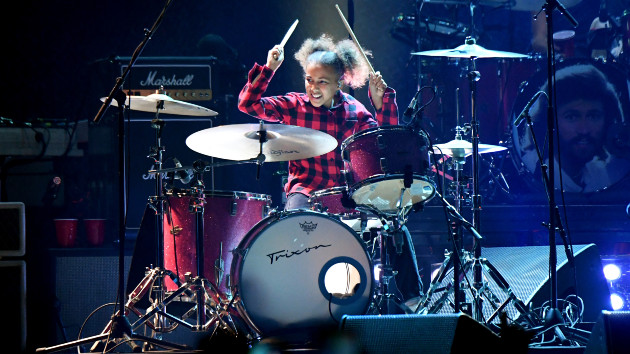 In between all the rock legends who played the Taylor Hawkins concerts in September, it may have been the youngest people onstage who stole the show.

Hawkins’ teenage son Shane memorably took his father’s place on drums to play “My Hero” along with Foo Fighters, while kid music prodigy Nandi Bushell — who went viral after challenging Dave Grohl to a drum battle — joined the Foos for “Learn to Fly” during the concert at London’s Wembley Stadium.

In addition to warming the hearts of countless rock fans, Shane and Nandi became friends, and jammed together backstage during the Wembley show.

Nandi has now shared video of that jam session, featuring her and Shane playing songs including the Foos’ “Everlong” and Nirvana‘s “Smells Like Teen Spirit.”

“Jamming with Shane backstage at Wembley is one of my favorite ever moments,” Nandi writes alongside the clip. “Shane is one of the nicest, friendliest, talented people I have ever met. He is so much fun to be around and has so much energy.”

Show Me the Money: Peter Frampton sells his catalog

Watch new animated video for the Beatles’ “Here, There and Everywhere”