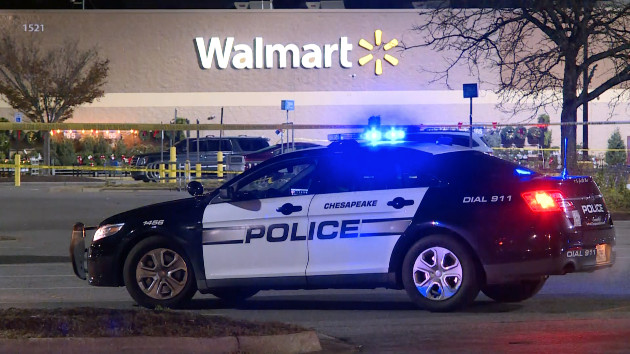 (CHESAPEAKE, Va.) — A gunman shot and killed six people before turning the gun on himself at a Walmart in Chesapeake, Virginia, on Tuesday night, according to sources and local police.

Law enforcement sources told ABC News that preliminary information indicates the gunman walked into the break room and opened fire at people before shooting himself. The suspect was an employee of that store and, possibly, a manager, the sources said.

The Chesapeake Police Department confirmed seven fatalities from the shooting, including the gunman. The suspect was believed to be a current employee and appears to have died from a self-inflicted gunshot wound, police said.

The 16-year-old victim killed in the Walmart shooting is Fernando Chavez-Barron, according to the City of Chesapeake. His identity had been previously withheld due to his age.

“We are saddened to announce the names of those we lost on Tuesday evening at the shooting at Walmart on Sam’s Circle but hope that with this information we can honor their lives in our community,” city officials said in a statement Friday.

“The City of Chesapeake has always been known as the ‘City That Cares’ and now, more than ever, we know our City will show up and care for those who need it most. Please join us in praying for the family and friends of these community members who we have lost,” the statement continued.

The city of Chesapeake, Virginia, released messages found on the gunman’s phone and the 9 mm handgun that Andre Bing legally purchased on Tuesday, just hours before the shooting.

In the note, Bing complained about his colleagues, referred to murder and asked for forgiveness. Bing claimed his coworkers made fun of him and compared him to Jeffrey Dahmer, even naming some he said would mock and laugh at him.

There are those in Chesapeake, Virginia, who haven’t celebrated a moment of Thanksgiving. Jessie Wilczewski, who’d only been on the job at Walmart for five days, told ABC News she is still haunted by images of the shooting.

“When I sleep like it still plays, bits and pieces, so I can’t run away from it, like I had to sit there on the floor and in front of me watch my coworker have her last moments,” she said, with tears in her eyes.

The shooter spared Wilczewski’s life, she said. Wilczewski believes the attack was targeted and she was let go because she had not worked with the shooter long.

“I looked at him after I got up from under the table and he saw it was me. And he had the gun pointed at me [gesturing] and he went like this and put the gun up. And then he just looked at me and said, ‘Jessie go home,"” Wilczewski said.

A mom of a 15-month-old boy, Wilczewski spent her Thanksgiving traumatized at home. The shades are drawn. Too many cars on the street can terrify her. Her biggest goal since the shooting was going to 7/11, which she accomplished on Thursday.

There are countless families in Chesapeake now facing this reality, reeling from tragedy on this holiday and preparing for a holiday season that won’t feel the same.

Walmart hosted a Thanksgiving dinner for shaken store employees and their families at a Delta Hotel in Chesapeake, Virginia. Counselors and faith leaders were on hand to talk people through the shooting’s immediate aftermath.

Whole families were seen going into counseling sessions together.

Six families in Chesapeake are without loved ones this Thanksgiving. Seven others have relatives in the hospital. And, countless people in the Chesapeake community are celebrating a holiday that will never be the same, after a store manager at a local Walmart opened fire on staff during a meeting Tuesday night.

Nov 24, 6:48 AM EST
Governor orders flags to fly at half-staff through Sunday

Virginia Gov. Glenn Youngkin has ordered flags to be flown at half-staff over the state Capitol and all local, state and federal buildings and grounds across the commonwealth “in respect and memory of the victims of the Chesapeake shooting, their families, and the entire Chesapeake community.”

“I hereby order that the flags shall be lowered immediately on Wednesday, November 23, 2022 and remain at half-staff until Sunday, November 27, 2022 at sunset,” Youngkin said in a statement.

Five of the victims of the shooting have been publicly identified by Chesapeake officials as Lorenzo Gamble, Brian Pendleton, Kellie Pyle, Randall Blevins and Tyneka Johnson.

The name of the sixth victim — a 16-year-old boy — has not been released due to his age.

Brian Pendleton, one of the six people killed in the shooting, would have turned 39 next week, his mother said in an emotional phone interview Wednesday.

“He had a real big heart,” his mother, Michelle Johnson, said. “Anybody that wanted to laugh, or just want company, he’d buy you lunch. He’d buy you anything in a minute.”

Pendleton worked at the Walmart for nearly 11 years as a custodian and “loved his job,” she said.

“He was just a hard worker and a good kid,” she said.

When a family friend called and told her there had been a shooting at his Walmart, Johnson’s husband went to where families had been told to convene for reunification. He was told Brian had been transferred to Norfolk General Hospital, so Johnson and her husband drove there, she said.

“We waited, and then the police came out with a nurse and they took us to a side room and that’s when they told us that he didn’t make it,” Johnson said, choking up.

Pendleton had a condition called congenital hydrocephalus. Johnson has it too, she said, but they had both been “blessed” not to have a severe case.

“We’re fighters, and we trust the Lord,” she said.

This was Pendleton’s favorite time of year, with Thanksgiving and his birthday on Dec. 2, said Johnson.

“I don’t understand why, what happened, happened,” she said.

“I will never go near that Walmart again,” she added.

“I know this community, and I know it well, and I know that we will come together and lend a helping hand to the victims’ families,” West said. “We’ll share this burden together and we’ll be stronger for it.”

The mayor promised to share more information on the incident.

Walmart employee Kevin Harper told ABC News he arrived to work early Tuesday night. He was sitting in the break room when he said something didn’t feel right — so he left.

Moments later, Harper said he heard around three or four muffled gunshots and he ran into a clothes hanger to hide.

“I couldn’t tell you how long I hid in there. Time just stopped at that moment,” he said.

He said he then ran as fast as he could out of the employee entrance. On his way out, he said he saw two people on the floor, including one woman covered in blood.

Chesapeake City Manager Chris Price said Wednesday that he was “very, very proud of the response of our public safety team” after the mass shooting at a Walmart.

“You hope a day like this never comes, but you train for it,” Price said during a press conference. “We practice, we talk about it, we discuss, we learn lessons from other places, we try to put those lessons to good use, hoping those lessons will never have to be put to good use.”

“I know it pains all of us to be together today on this day of incredible tragedy and unimaginable sadness,” he added.

Price then read a statement from Chesapeake Mayor Rick West, who tested positive for COVID-19 and could not attend the press conference.

“I am devastated by the senseless act of violence that took place late last night in our city,” Price said, quoting West’s statement. “My prayers are with all those affected — the victims, their family, their friends and their coworkers. I am grateful for the quick actions taken by our first responders who rushed to the scene. Chespeake is a tighknit community and we are all shaken by this news. Together, we will support each other throughout this time. Please keep us in your prayers.”

The mayor as well as the city council have all been fully briefed on the shooting and the response, according to Price.

In addition to the seven fatalities, four people were wounded in Tuesday night’s shooting at a Chesapeake Walmart, according to police.

“While our investigation continues we can tell you the following: six victims have died, four victims are in area hospitals with conditions unknown at this time and the suspect is dead from what we believe is a self-inflicted gunshot wound,” Chesapeake Police Chief Mark Solesky said during a press conference on Wednesday morning.

While police believe the suspect was a current employee of the store, Solesky would not confirm whether the victims were all employees as well. He told reporters that it’s unclear whether the shooting was a targeted or random attack.

Preliminary information indicates a gunman walked into the break room of a Chesapeake Walmart and opened fire at people before shooting himself, law enforcement sources told ABC News.

The suspect was an employee of that store and, possibly, a manager, according to the sources.

Law enforcement sources also told ABC News that authorities are investigating whether the shooting was a case of workplace violence.

Nov 23, 8:24 AM EST
Police confirm deceased suspect was an employee

The suspect in Tuesday night’s mass shooting at the Walmart on Sam’s Circle in Chesapeake is believed to be a current employee and appears to have died from a self-inflicted gunshot wound, according to Chesapeake Police Chief Mark Solesky.

“We have reason to believe that there’s no risk to the public at this time,” Soleksy said during a press conference on Wednesday morning. “We cannot tell you the identity of the shooter because his next of kin has not been notified.”

Police received the initial 911 call at 10:12 p.m. local time. Officers responded to the scene within two minutes and entered the store at 10:16 p.m. local time, where they found the deceased suspect and multiple victims. The scene was declared safe by 11:20 p.m. local time, according to Soleksy, who described the shooting as “senseless violence.”

“This investigation is still ongoing, so there’s no clear motive at this time,” he told reporters. “We’ll be processing that scene for days.”