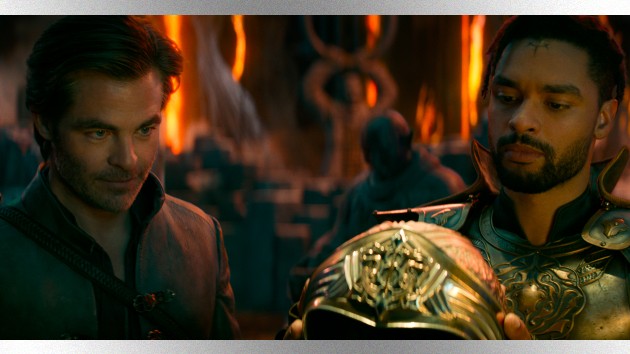 © 2022 PARAMOUNT PICTURES. HASBRO, DUNGEONS & DRAGONS AND ALL RELATED CHARACTERS ARE TRADEMARKS OF HASBRO.

Fast and Furious series star Michelle Rodriguez is back in fighting form in the new trailer to Dungeons and Dragons: Honor Among Thieves.

The adaptation of the beloved role-playing board game also stars Chris Pine and Hugh Grant, with the former playing a wise-cracking schemer called Edgin and the latter the nefarious Forge Fletcher.

“I don’t want to see you die,” Grant deadpans to Pine’s character. “Which is why I’m going to leave the room.”

Rodriguez plays the barbarian warrior Holda, and in the opening moments of the new trailer, she uses a cobblestone to fight her way out of a grisly execution scene single-handed.

Regé-Jean Page‘s Paladin fighter Xenk is also seen in the action- and magic-packed coming attraction, which, like the teaser, is partially set to Led Zeppelin‘s “Whole Lotta Love.”

Last year, Pine called the film “Game of Thrones mixed with a little Princess Bride, just a smidge of [Monty Python and the] Holy Grail” — and that sense of humor carries through to the new trailer.