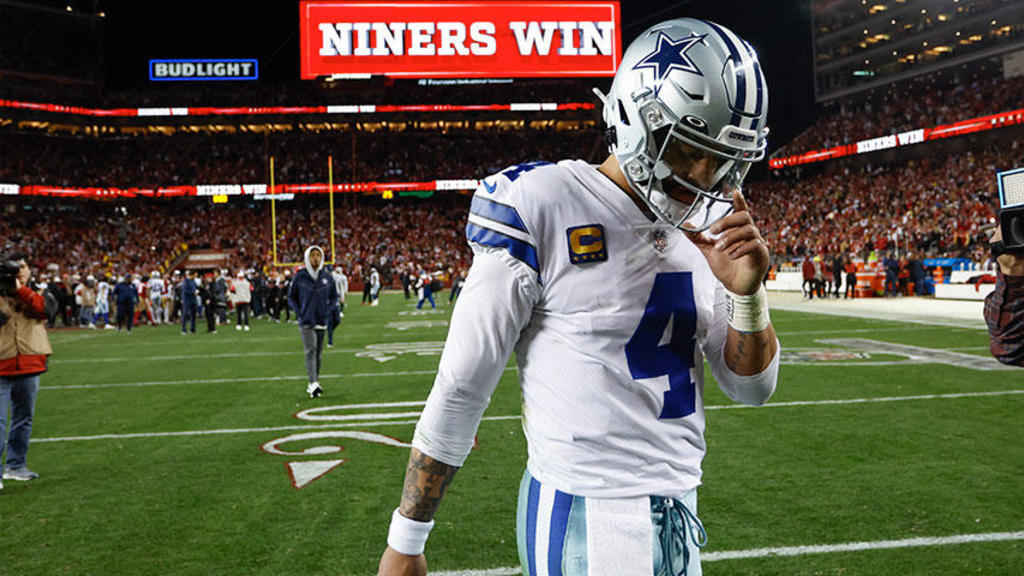 FRISCO, Texas (AP) — For all the progress of the first road playoff victory in 30 years, Dak Prescott and the Dallas Cowboys still can’t get out of their divisional-round rut.

Now they have another year to think about it.

“They’re all independent,” the Dallas quarterback said after dropping to 0-3 in divisional games, almost half of the record seven consecutive losses in this round for the Cowboys.

“You can’t take one from the other or think about that. But all I can think about right now is this game and how disappointed I am in my play at this point.”

Prescott threw two interceptions in a 19-12 loss to San Francisco, a week after easily his best playoff performance in a victory at Tampa Bay that eliminated seven-time champ Tom Brady.

The Cowboys (13-6) have fallen short of the NFC championship game in 12 consecutive playoff appearances since winning the most recent of the five Super Bowl titles for America’s Team 27 years ago.

Prescott was the problem early, but the defense was a big letdown late by allowing two long scoring drives and not getting Dallas the ball back with enough time for a realistic scoring chance.

The offseason focus, though, will be largely on Prescott’s failures.

He went from a personal playoff-best 143.3 passer rating against the Bucs to a playoff-worst 63.6 against the Niners. His career-high 17 interceptions, playoffs included, led the NFL.

Owner/general manager Jerry Jones remains committed to Prescott. The 2016 NFL Offensive Rookie of the Year has two years left on a four-year contract that pays $40 million per season.

“We’ll come out of here with something good out of this,” Jones said. “That’s an edge. Tonight didn’t change my mind about the edge with him.” 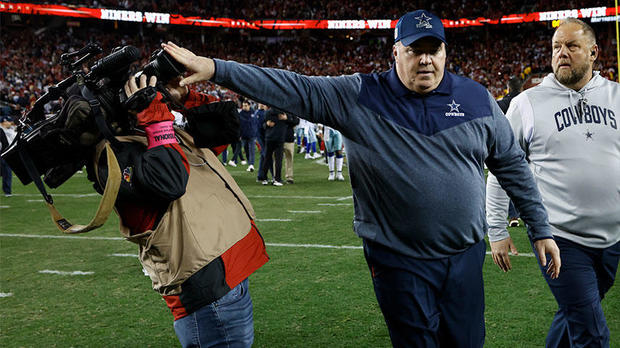 Dallas Cowboys head coach Mike McCarthy pushes a cameraman away while walking off the field after an NFL divisional round playoff football game against the San Francisco 49ers in Santa Clara, Calif., Sunday, Jan. 22, 2023.

Coach Mike McCarthy was photographed extending an arm into the lens of a TV cameraman while walking off the field after the game.

The cameraman tweeted that he didn’t think the coach pushed him, although the photograph made it appear he had. The cameraman said he met privately with McCarthy, who he said apologized.

ENDING WITH A THUD

Star running back Ezekiel Elliott and tight end Dalton Schultz might have played their final games with the Cowboys. If so, both endings left something to be desired.

Elliott was the center for a strange formation on the final play, getting run over by a defender after the shotgun snap to Prescott. Receiver KaVontae Turpin was immediately tackled before the Cowboys could start pitching the ball on a play that began 76 yards from the end zone.

Schultz inexplicably didn’t get a second foot down on the catch before that play, costing the Cowboys about 15 yards of field position and preventing any realistic chance at a desperation pass.

Elliott could be cut without significant salary cap implications on the $90 million, six-year extension he signed three years ago.

Schultz, who scored three touchdowns in the playoffs, played on the franchise tag and appears unlikely to do so again. It probably will take a long-term contract to keep him, and the Cowboys have some expensive priorities coming in the next few years. 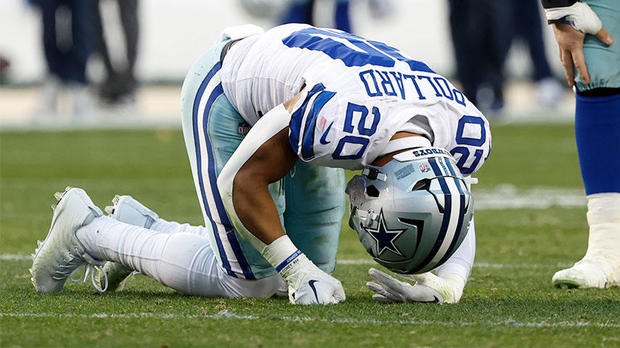 Dallas Cowboys running back Tony Pollard (20) remains on the field after being tackled against the San Francisco 49ers during the first half of an NFL divisional round playoff football game in Santa Clara, Calif., Sunday, Jan. 22, 2023.

Running back Tony Pollard, who emerged as the best playmaker on offense, broke his left fibula against the 49ers when he was tackled in the first half.

He was on the final year of his rookie contract, and still will be rehabbing an injury that will require surgery when free agency opens in March. Pollard might be headed for the franchise tag.

CeeDee Lamb had a career season in his debut as the No. 1 receiver after the offseason trade of Amari Cooper in a cost-cutting move.

The Cowboys never really did figure out how to replace Cooper, though. Before the ill-conceived final play, Noah Brown (two catches) and T.Y. Hilton (one) were the only receivers with a catch after Lamb’s 10 grabs for 117 yards.

Michael Gallup, who signed a $58 million, five-year contract last offseason, was shut out against the 49ers.

Micah Parsons, an All-Pro in both of his seasons, is the anchor of a defense that led the NFL in takeaways in consecutive years. There are some questions about the supporting cast.

Linebacker Leighton Vander Esch, Dallas’ first-round pick five years ago, had a strong season on a one-year contract after the Cowboys didn’t pick up the fifth-year option on his rookie deal.

Brett Maher is a free agent after setting an NFL record with four missed extra-point kicks in the wild-card win over the Bucs. He had one blocked against the 49ers, but the kick looked as if it would have missed anyway. He finished the season by missing six of his last seven PATs.

It’s easy to forget that Maher stabilized a shaky situation as a late add in training camp when a kicking competition flopped. Playoffs included, he was 31 of 34 on field goals (91%).