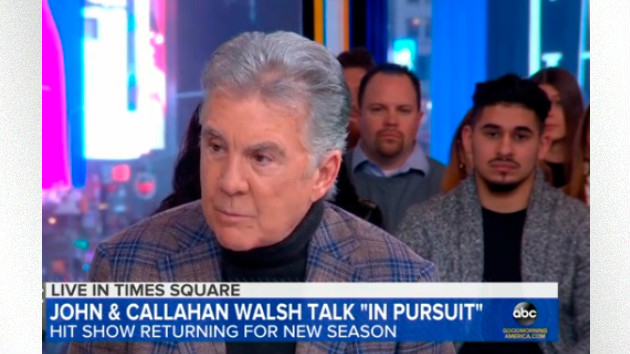 ABC(NEW YORK) — Emmy-winning America’s Most Wanted host John Walsh and his son, Callahan, are teaming up again for the second season of their unsolved crime show, In Pursuit with John Walsh.

The first season of the show, which debuted on Investigation Discovery last year, was able to bring justice to families all over the country with the help of viewers.

“We did 12 shows and caught 10 bad guys, got a three-year-old missing child back alive from Paraguay, and the show was a big hit,” John Walsh tells ABC Audio. “It was a real surprise, but it was a wonderful surprise.”

The father-son team hope to do the same this season. Callahan is spotlighting a case very close to him — the murder of his childhood friend, Lindsay Harris.

John’s first son and Callahan’s brother, Adam, was kidnapped and killed in 1981, sparking John’s mission to bring fugitives to justice and find missing children. It’s a relentless job, but one the family’s committed to.

“I grew up in a family that said, we need to make sure Adam didn’t die in vain. If his song is to continue, then we must do the singing,” Callahan says. “And I don’t know if there is much decompression that happens, but it’s the recoveries of the missing children and the captures of the fugitives that make it all worthwhile.”

In Pursuit with John Walsh airs tonight at 10 p.m. ET on Investigation Discovery.