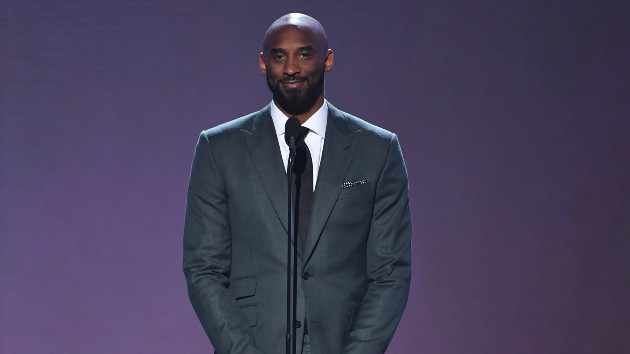 ABC/Image Group LA(LOS ANGELES) — Celebrity sports fans from around the world are paying homage to NBA legend Kobe Bryant after he died in a helicopter crash in California on Sunday.

Fellow former NBA stars Scottie Pippen, Shaquille O’Neal, and Kareem Abdul-Jabbar were among the high-profile players who reacted to news of the beloved basketball player’s death.

Bryant was one of nine people on a private helicopter that went down in Calabasas, California on Sunday, killing everyone on board. He was 41.

Bryant’s 13-year-old daughter, Gianna, was also killed in the crash, according to the NBA. The other seven victims in the crash have not been identified.

Shaquille O’Neal, who played with Kobe on the Lakers, shared an emotional post.

“There’s no words to express the pain Im going through with this tragedy of loosing my neice Gigi & my brother @kobebryant I love u and u will be missed,” O’Neal wrote. “My condolences goes out to the Bryant family and the families of the other passengers on board. IM SICK RIGHT NOW.”

Meanwhile, retired NBA star Kareem Abdul-Jabbar, posted a video of himself reacting to the news.

“Most people will remember Kobe as the magnificent athlete who inspired a whole generation of basketball players,” he wrote in part. “But I will always remember him as a man who was much more than an athlete.”

Twitter temporarily crashed at around 3 p.m. ET as news of the player’s death flooded the platform. The term “Kobe” quickly became the No. 1 trending topic on Twitter, followed by “Mamba” and “BlackMamba.”

Music stars also reacted to the news of Bryant’s passing, with Drake posting a mural of Bryant on Instagram and R&B singer John Legend reminding fans to hold their loved ones close.

“I’m so sad and stunned right now. In Staples Arena, where Kobe created so many memories for all of us, preparing to pay tribute to another brilliant man we lost too soon, Nipsey Hussle,” Legend, who was preparing for the Grammy Awards, tweeted. “Life can be so brutal and senseless sometimes. Hold on to your loved ones. We miss you, Kobe.”

“Kobe was a legend on the court and just getting started in what would have been just as meaningful a second act. To lose Gianna is even more heartbreaking to us as parents,” Obama wrote. “Michelle and I send love and prayers to Vanessa and the entire Bryant family on an unthinkable day.”

“This makes me so sad. Kobe you were always so sweet to me. Known you over 10 years.. not super well but we always joked about you coming over and playing that game of horse!” Lavato wrote, sharing a photo of herself with Kobe and Gianna. “You will he so missed by so many. You’re a legend with wings now. RIP Kobe.”

“This honestly doesn’t make sense….I just saw you man,” Hart wrote, sharing a image of Bryant on Instagram. “This hurts my heart. God please place your hands on his family and help guide them thru this unbearable time. We love you forever man…Legends never die!!!! #MambaMentality #RIP…. RIP to the other passengers as well as sending prayers to their families.”