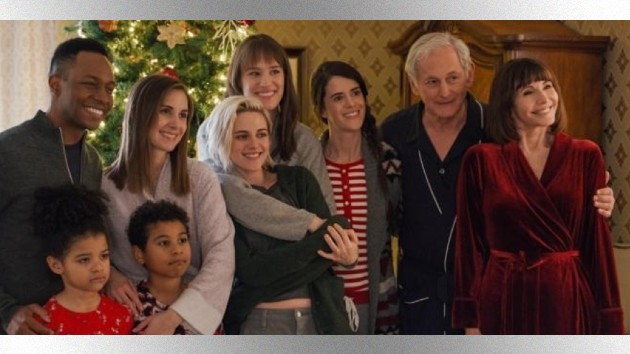 In the film, Stewart’s character Abby agrees to visit her girlfriend Harper’s family for the holidays, with the intention of popping the question to Davis’ character. However, there’s a catch: she learns Harper’s family is not only conservative, but doesn’t know she’s gay.

Mary Steenbergen plays Tipper, the tightly-wound matriarch of the family, who is preoccupied with her husband’s run for office and projecting a picture-perfect view of their family because of it.

Steenbergen tells ABC Audio, “I just love the film because every single character in the film goes somewhere as a result of this singular moment of bravery where Mackenzie’s character says who she really is. And it is just since each of us to an important place.”

Alison Brie plays Sloane, Harper’s even more tightly-wound sister. An over-achiever with a handsome husband and two seemingly perfect kids — and who is on a nickname basis with Gwyneth Patrow, thanks to a partnership with Paltrow’s lifestyle empire Goop — she seems to have it all. However, we learn appearances can be deceiving.  For the former Community star, the authenticity of the script grabbed her.

“[Y]ou didn’t feel like it was a send up of a holiday movie or a cliche in any way, it felt so grounded and real,” says Brie. “I think we all found ways to connect with our characters in a genuine capacity rather than playing any of them as stereotypes or tropes of holiday movies. And you can tell.”